Greetings! My name is Diogo Morales (yet I am not hispanic). I am a seeker of knowledge hailing from Portuguese-speaking Brazil. My purpose in the TES Wiki is to amuse myself from time to time with an entertaining hobby to practice and to improve my English-related skills.

Some time ago I have written articles addressing the main questline of the primal The Elder Scrolls: Arena, leaving not long after finishing the work due to reasons of personal activities and fatigue.

By now, however, I am thinking on restarting the work here. Who knows? 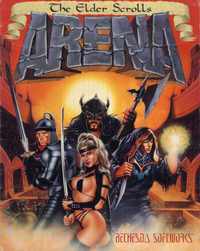 After my initial attempts to improve existing articles of the Wiki failed due to my basic knowledge of its written language I decided to fill the blank articles regarding early Elder Scrolls games, starting with The Elder Scrolls: Arena as my first subject. Twas not, however, simple to a modern gamer such as I to patiently understand the mechanics of an RPG belonging to the much earlier generations. Even prior to playing the game the difficulties revealed themselves during the messy configuration proccess.

My first steps into the game proved to be disastrous and demotivating due to its overwhelming difficulty. The very first dungeon was quite a challenge to me, succeding to reach its exiting gate only after many tries ending in defeat.

The game, however, did become increasingly entertaining as I procceded deeper into its story. Like Morrowind, Arena, if aged and brute, will reveal itself with the right amount of persistence.

My project in the Wiki was conducted simultaneously with the completion of Arena's increasingly difficult and time-consuming quests. It was while playing the game that I created hundreds of images and spent even more time during the proccess of selection and edition so they could be integrated into the articles I wrote. Besides that, in my quest for content I ventured into Arena's confusing archives and searched, and eventually found, long forgotten info in the internet regarding technical particularities and establishing lore-oriented links between Arena and its sequels. I even managed to obtain the rare "Codex Scientia".

Slowly my project reached its state of completion and I finished my first contact with the practice of Anglo-Saxan writting. 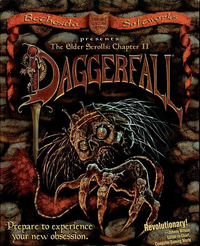 Finishing Arena's storyline shifted my attention to its sequel, The Elder Scrolls II: Daggerfall. Unlike the former, however, I had no intention of covering its articles in the Wiki, due to being tired of writting and believing that I lacked the necessary qualities to undertake another project.

While knowing in advance the abundance of problems and nuisances I surely would face, Daggerfall proved on its very start to be substantially harder than I thought. Hampering features included its enormous skill list; the combat mechanics - both melee and ranged; the massive, infernal, random-generated dungeons; et cetera. Further making things more difficult was my personal preference towards sorcery-focused characters, whom due to an absence of regenerative energies have to resort on resting and sleeping meanwhile surrounded by foes.

That in the game which caused me most dismay was certainly its dungeons. Random-generated and mapless; truly, mazes of seemingly endless corridors and passages. While searching for some particular item inside, often I would not find it... beyond forgetting the way back to the entrance.

Unofortunately, as I procceded further in the storyline, my experience got increasingly more annoying, as if the game itself was designed to prevent completion. My giving-up point happened when a bug stalled the main quest, due to the non-deliverance of a letter that was intended to be given to my character. This happened during my fourth attempt to finish the game. And I was not returning for a fifth. As much as Daggerfall was an improvement in relation with its prequel, the game was frankly too large. As a vast multiplicity of paths leading to nowhere. It surely, however, made me thank for the change of direction that Morrowind presented.

Though my little project required a huge investment of time and patience, I didn't lay rest to it. At its time of writing, my understanding of English was rather flawed, thus resulting in (very) poorly structured sentences and paragraphs.

Today, however, I might attempt to repair these widespread grammatical and spelling mistakes I commited.

The Elder Scrolls I: Arena

I made a great work creating articles and making content to the first game of the series, The Elder Scrolls: Arena. Many of the game's articles were made or repaired by me. But why would I still work with a game of such oldness? Well, I have my motives but I give you one: ignore older games is the same as ignore the entire series.

I focalized mainly in the Main Quest and Creatures articles. However I am planning to do a bit more before going to my next challenge. I also created Main Quest template. You know... when I started this project, I did not believe I could make it and now I am finishing it. It was a very good experience.

After this long work of mine I finally completed the articles I wanted. By this day forth, The Elder Scrolls: Arena is a bit more complete on this Wiki to be remembered by all TES players!

Some facts about my work with Arena:

Retrieved from "https://elderscrolls.fandom.com/wiki/User:SeniorDiogo?oldid=2979197"
*Disclosure: Some of the links above are affiliate links, meaning, at no additional cost to you, Fandom will earn a commission if you click through and make a purchase. Community content is available under CC-BY-SA unless otherwise noted.