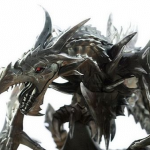 NOTE: This profile was created with the intent of developing the information available on various wikia's, primarily those orientated around video gaming software, comic book creations, and popular movie titles. Alternate wikia links have been utilized to maintain relevance.

I recently joined the wikia community in an attempt to sate my desire of sharing the vast plethora of knowledge I possess regarding a number of video games, comic books, and movies.

I've been embracing the gratification these merchandise provide since the dawn of my time, and over the years of developed a passion for hoarding and scrutinizing the immense detail they entail. However, never before have I given myself the opportunity to share the knowledge and perceptions I've accrued over the past decade (and a bit).

I've been gaming, reading comics, and watching movies all my live, I've had my fair of experiences with a large portion of the most popular creations. I've been there, I've done that. I'm a veteran.

The Elder Scrolls is one of those game series' which has never incited doubt in my mind. I've always been able to anticipate new releases without worrying about major mechanical or canonical shifts. For that, it is one of my all time favorite game sequences. I've played the following:

I'm currently focusing on correcting, expanding, formatting, revising, and categorizing various Skyrim Wiki pages so that they are consistent with the Wikia's quality standards. I wanna see these pages accurate, reliable, concise, and comprehensive!

I've made substantial amendments to the following pages (in chronological order):

Retrieved from "https://elderscrolls.fandom.com/wiki/User:Skillick?oldid=776750"
*Disclosure: Some of the links above are affiliate links, meaning, at no additional cost to you, Fandom will earn a commission if you click through and make a purchase. Community content is available under CC-BY-SA unless otherwise noted.