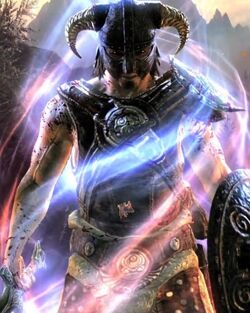 "I saw a vandal the other day, terrible creatures."
―The Milkman

The Milkman is a Milk drinker who fells all foes before him with his mighty battleaxe. From the Ashlands of Vvardenfell, to the depths of Oblivion, to the farthest reaches of Skyrim, to the darkest corners of the Shivering Isles, the Milkman always delivers.

Call me Ken. I've been on board the Elder Scrolls hype train since 2008. I When I first got my PlayStation 3, my very first game was The Elder Scrolls IV: Oblivion. Later on, my friends gave me a copy of Morrowind, which I thoroughly enjoyed. When word of Skyrim came my way, I pre-ordered without thought or hesitaton. When 11.11.11 rolled around, me and three other friends played it all through the night, me having the honour of experiencing it on a big-ass projector.

Below are a list of my characters and their many adventures.

Little is known about Alkali's life, though his deeds are remembered greatly as a powerful Nord warrior. He married Uthgerd the Unbroken after besting her in a tavern brawl, and the two lived together in Breezehome with a single adopted daughter. He fought for the Imperials in the Skyrim Civil War, becoming a well-known war hero throughout the land. He also played a key role in unravelling the vampire Vampire Lord Harkon's schemes.

Though he had many companions, his closest friend was undoubtedly Erik the Slayer, with whom he went on many adventures, including many key battles in the Civil War and his quest to defeat the dragon Alduin. After travelling to Solstheim, he befriended the Skaal, defied the Deadric god Hermaeus Mora and defeated Miraak in an epic duel to the death. After this ordeal, the Dragonborn built a home in The Pale, just north of Whiterun, where he lived with his family in peace for the rest of his days.

Alflagandorf is a berserker living in Falkreath Hold in his private home, Lakeview Manor. Many of his deeds are surrounded in myth and legend, though some are documented more accurately.

In the Lair of the Spider Queen

Inside an Orcish Tower

Rex is an Argonian fleeing from Windhelm on a treacherous journey to Solitude. Many of his adventures are well-documented.

Retrieved from "https://elderscrolls.fandom.com/wiki/User:The_Milkman?oldid=3006495"
*Disclosure: Some of the links above are affiliate links, meaning, at no additional cost to you, Fandom will earn a commission if you click through and make a purchase. Community content is available under CC-BY-SA unless otherwise noted.