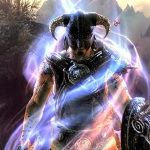 Khajiit For the win!

The next Elder scrolls game should take place in Elswyr, I never get tired of people talking in 3rd person.

Still don't understand how anything but a Argonian could be half dragon. Dragons aren't furry! Are they?

Dragonborn hides in shrubs and draws back his bow and places an arrow on it.

5 seconds later...'Guard replies and says "I guess it was just my imagination"

Well, Skyrim has been out for a very long time now, but I feel like replaying it starting december 12! I think everyone should just have a month where they replay good games they own, such as skyrim. I think i'm going to create a breton. The new DLC Dragonborn looks pretty cool too, time we go back to Morrowind!

Well i guess i'm going to be playing on hard difficulty, Alduin is gonna be a challenge, most likely i'll make a spell sword, healing magic primarily. I feel pretty ready to start again, not sure if I should join or destroy the Dark Brotherhood. Good Guy? Bad Guy?, what do you think?

I say bad guy Breton spellsword. I'll try to upload pictures of him as I go. Goals from greatest to least:

Addamon: This character is my dark elf mage. He amounted to level 34 and has completed all daedric quests. He prefers to duel wield spells and is skilled in healing and destuction magic. He is my favorite character so far. Male

Thor: My first character created. He is a Nord who prefers to use heavy armor and is a spell sword. In one hand he has a enchanted daedric sword, in the other fast healing. He amounted to level 40. Male

Toxic: My stealth character who specilizes in archery. He uses the nightingale bow and armor. He came to about level 25, and yes, he is a Khajiit. Archery level came up to 80 or so. Male

I find it funny how i never started that breton i said i was going to, whatever! Nobody must have been to intrested in him anyway, I will try to get a picture of my Redguard though.

Did you ever notice that there are more overweight sports fans, than there are gamers? I guess gamers are so preoccupied with gaming that they can't bother to go get up and get something to eat. Thats sort of how I am. I really never thought of this before untill that i thought that most gamers i know are scrawny. Are you like that and know more overweight sports fans than gamers, or is this just me experiencing this? Anyway I'm going to post some character pictures here, the only one i'll put is tyrone.

Retrieved from "https://elderscrolls.fandom.com/wiki/User:Yasko64?oldid=2400674"
*Disclosure: Some of the links above are affiliate links, meaning, at no additional cost to you, Fandom will earn a commission if you click through and make a purchase. Community content is available under CC-BY-SA unless otherwise noted.