Bethesda Softworks is known for the multitude of easter eggs they hide in their games. Some of them well hidden, some of them rather obvious, they always manage to make me laugh regardless. Skyrim follows this long tradition of hidden jokes in the game, and the wiki even has a page detailing every single one of them! For those who don't have the time to read through the entire page, we've compiled a list of best easter eggs in Skyrim, and we'll give you the chance to vote for your all-time favorite!

After voting, don't forget to leave your opinion in the comments!

During A Night to Remember one of the tasks is to obtain a wedding ring from a hagraven named [Moira]], who will say "My precious" while trying to get the ring from her, in reference to Gollum from Lord of the Rings.

At the Throat of the World, the player can find the Notched Pickaxe, a reference to "Notch", the creator of Minecraft. As a pickaxe it is used for mining and it features an enchantment that boosts Smithing, Skyrim's method of crafting. Its hidden-yet-noteworthy location combined with its lack of appearance in any other Elder Scrolls game confirm its Easter Egg nature.

A mammoth can be found directly east of Frostflow Lighthouse, frozen into the side of a glacier with arrows and what appear to be prehistoric spears embedded in its hide. The arrows in the mammoth appear to be Dwarven, hinting that the Dwemer may have killed this beast.This a Reference to a Mammoth frozen in ice and recovered in the 1990's.

Arrow to the Knee

The guard's frequent comments regarding "taking arrows in the knee" is actually a subtle reference to the fact that Greaves are not an armor type in Skyrim, unlike in previous games, where Greaves protected the shin and knees. It's also a common factor on websites that when people comment with the joke, they say "arrow to the knee" when in fact the guards say "arrow in the knee". 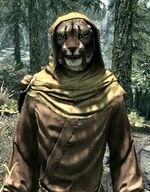 M'aiq the Liar reappears in Skyrim. He appeared in Morrowind and Oblivion, as an Easter Egg Basket of sorts for developers to comment on some of the game features that were removed, added, or were/are planned for the series as well as other RPG gaming community related remarks.

In the Dark Brotherhood, if you read Cicero's Journal Volume 1, he writes; 27th of Rain's Hand, 4E 187 Completed the Arena contract. I ultimately decided to pose as a starstruck fan, and immediately got into the Grand Champion's good graces. While escorting the arrogant fool through the Great Forest, I slashed his throat and left the corpse for the bears. This is a reference to the Adoring Fan in Oblivion, who many gamers found incredibly annoying.

A running joke in Bethesda games (dating all the way back to Arena) about sweetrolls can be found throughout the game. The joke even occurs outside the Elder Scrolls world. In Fallout 3, during your 10th birthday party, a character called Butch attempts to muscle you out of your sweetroll.

Snow White and the Seven Dwarfs

Inside the Blackreach you will find a building called the War Quarters. Inside these quarters, you'll find one room with 7 small beds, placed in a circle around a lantern. This may be a reference to Snow White and the Seven Dwarves. Opposite of the bedroom is a hallway with at the end another bedroom, where a much larger double-bed is found. 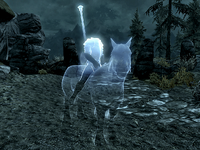 At night along roads you have a chance of encountering a spectral horseman without a head galloping along at full tilt. He carries an axe on his back, which is likely a reference to Washington Irving's "The Legend of Sleepy Hollow". If you follow him, he eventually takes you to Hamvir's Rest, where there are several skeletons to fight and a Master chest.

In Endon's House in Markarth, look for a shelf in the back of the room with Sliced Goat Cheese, a row of Garlic and some Glow Dust arranged to look like a scene from Pac-Man.

Retrieved from "https://elderscrolls.fandom.com/wiki/User_blog:MarkvA/Top_10_Skyrim_Easter_Eggs?oldid=2970069"
*Disclosure: Some of the links above are affiliate links, meaning, at no additional cost to you, Fandom will earn a commission if you click through and make a purchase. Community content is available under CC-BY-SA unless otherwise noted.