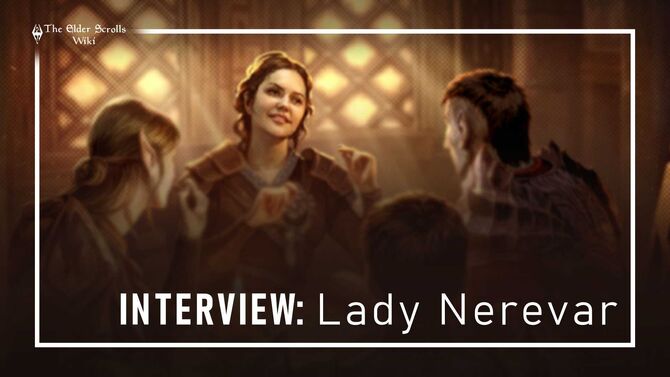 LadyNerevar is a known member of The Imperial Library's staff and a long-time member of the general The Elder Scrolls community, especially the part that likes discussing and researching lore. You might have met her at r/teslore, UESP, various forums or The Imperial Library itself. She has created multiple projects that benefit creators and other fans, which we will mention during the interview. We've had the honor to talk to LadyNerevar about those projects and her background. Enjoy the read!

Stygies VIII: Let's start with the beginnings. What were you researching at the very beginning, when you started being involved with TES lore?

LadyNerevar: I think the lore was what made me obsessed with Morrowind in the first place, even I didn't know to call it that back then. I don't know that I was ever researching anything in particular as much as reading everything out there and jumping head first into all the discussions of the day.

I have three formative lore memories. The earliest: finding and reading Chance's Folly in a storeroom in Vivec, and being afraid that the book wasn't just fiction -- that my character was about to be forever locked in this room. Later: reading the first of the 36 Sermons on the official Elder Scrolls website and experiencing that amazing feeling of being utterly confused while at the same time absolutely sure that there is meaning to be discovered there. And, finally, a year or so later, having an argument about the nature of Akulakhan vs. Numidium on the Tamriel Rebuilt forums (in which I was very, very wrong).

Stygies VIII: And years later you're in a completely different place in the community - you wrote a famous guide on how to become a lore buff which usually gets recommended to people who are beginning to learn about the lore, like you were back then. How did you devise its contents and structure?

LadyNerevar: The original How to Become a Lore Buff guide was actually written by a guy named Le Diver sometime around 2004 (I think). By 2010, Le Diver was gone and the thread was severely outdated, despite still being stickied at the top of the lore forum. So, I took it on myself to create a whole new guide. I think the structure was borrowed from that original one, as well as an FAQ post by Nigedo that accompanied it. I expanded it and added more about lore topics that had come to dominate discussions of the day: CHIM, Towers, the nature of canon, etc.

For the content itself, there were a few important considerations: I wanted the guide to remain timeless, rather than needing to be frequently updated. I also wanted it to be truly introductory, rather than overloading the reader with every possible bit of information. Both of these points lead me relying entirely on  primary sources. Unlike summary articles, they do not need to be revised, and in addition to onboaring the reader with information, they also teach them how to read and interpret lore in context.

Stygies VIII: Speaking of teaching them how to read and interpret lore, this seems to be the main philosophy of The Imperial Library, the site that's mostly an archive of content that the reader can further use or interpret. Our seasoned readers are familiar with it, but could you tell us shortly about your role there and what does managing it entail for those who haven't used it?

LadyNerevar: Absolutely. I'm a "Librarian," which basically means administrator. Although I do some back end stuff occasionally, the vast majority of my role is identifying and documenting content: texts from newly released games, story lines, official website articles, maps, etc. For a long time TIL was the only place to find out of game texts from developers, and while that's no longer the case, archiving developer posts and writings, both current and historical, is still a large part of our mission. Besides all that, I also interface with Bethesda/Zenimax and with other fan sites, handle social media, and manage membership on the site itself.

Stygies VIII: You created a very accurate map of Tamriel (4E 200) last year. Could you tell our readers more about the process of making it? Wasn’t it made based on multiple official and in-game maps?

LadyNerevar: Work for the "Complete Map of Tamriel" actually started in 2014. Arthmodeus' map of Tamriel was at that point the most detailed and most commonly referenced map, despite being full of incorrect names and not having been updated since 2006. I wanted to take all the info we had received since then and generate a new "definitive" map. Of course, with the huge amount of inconsistencies, contradictions, and gaps in our knowledge, a true definitive map is impossible.

The biggest question in the creation of the map was when to use ESO information and when to default to older sources. While ESO is the newest resource on most regions in Tamriel, it is also very distorted when compared to single player and lore maps, not to mention set hundreds of years in the past.

In the end, I chose to use the Anthology edition Tamriel map as the general base, and use TES3, 4, and 5 for interior info for those regions. For the rest, I skewed ESO data to fit the Anthology framework, and adjusted from there. You can read more about the process here: https://www.patreon.com/posts/16939572

I posted the first completed version in 2017, and have been doing periodic updates since. Luckily, since ESO has chosen to go to documented areas two years in a row, I've had a bit of respite.

Stygies VIII: Your “LGBTQ+ in Tamriel” article is well known for documenting the complex range of sexualities/gender identities in TES games. What do you hope future games will do in this regard?

LadyNerevar: I hope that future TES titles continue with ESO's trend of presenting LGBTQ+ people just being people. The stories of LGBTQ+ characters are just as realized as those of straight ones, and are not played for sensationalism or laughs.

I do wish that future media could explore the social aspects of Tamriel a more, which includes LGBTQ+ issues. Lots of room for creative and inclusive worldbuilding.

I also think that we can be better about bi/pan representation (many characters right now are only identified as bi/pan because their dialog lacks a conditional to check for the player's gender), and, as far as I know, we don't yet have any nonbinary or trans men characters (and our one intersex character is a god from 2002!). With the hundreds of NPCs in each TES title, this shouldn't be a big ask.

Stygies VIII: Will we see more fun tools like Elder Scrolls Character Art Idea Generator and Elder Scrolls Writing Prompts from you in the future?

LadyNerevar: Totally. As with most things, I tend to plan out a project, do 10% of it, abandon for at least a year, and then return all of a sudden to complete it in a flurry of activity. I have some quite large generator ideas stuck in the "abandon" stage right now that I'm not yet ready to talk about. One of them is a probably needlessly complicated name generator for every Tamrielic race, which I began a few years back and should pick back up someday soon.

I also plan on adding more characters and poses to the Character Art Idea Generator when Blackwood comes out this year.

Stygies VIII: Your creations made it to games. I’ve seen that the depiction of Alessia in ESO has been based on how you’ve been picturing her in your artwork for years. Have you seen other works of yours make it to the game’s DLCs or other games?

LadyNerevar: Credit where it's due: my depiction of her was actually based on a sketch by Michael Kirkbride. I did a painting based on it around 2013 (as well as an earlier more obscure drawing around 2009), and the basic design was  picked up by other awesome artists who put their own spin on the theme. Seeing the community embrace your work (whether it's the Alessia painting, or the weird Shor drawing, or the explorative Tamrielic scale map that I have to constantly caveat) is awesome, with or without official recognition.

I don’t want to lay claim to anything specific in the games. I think I see connections to ideas I've championed, but I can't know for certain whether they're directly inspired by what I've done or just pulled from the same zeitgeist.

Stygies VIII: Yeah, it can be inspired by same sources. Also, what do you think is the most omitted, underrated piece of lore in the current TES community and games?

LadyNerevar: Oh man, I don't think I can pick just one thing. There's a ton of small dialog from Redguard and Morrowind that gets overlooked in favor of the flashier stuff. Maybe Dreekius' implication that emigrant Argonians are spies for the Hist? Or the intricacies of Imperial trade regulations for Vvardenfell.

Stygies VIII: To sum up the topic of TES games, what impact has being involved with the TES community had on your life overall?

LadyNerevar: All the impact, pretty much. Morrowind put me on the path to becoming a game developer, made me a ton of friends, and eventually led me to the man I've married.

Stygies VIII: Actually, can you say anything about your job as a game producer or developer and you getting started in the industry?

LadyNerevar: I'm currently a Senior Producer at an AAA startup working on a big secret project. On a day to day basis, this means I coordinate between departments, anticipate and prevent issues, do lots of planning, run lots of meetings, and generally try to keep things moving smoothly for the team. Since we're a smaller company, I also get to help out in other areas, like recruiting and social media. In many ways it's reminiscent of my modding work with Tamriel Rebuilt back in the day, only with actual schedules and budgets and a whole lot of bleeding edge tech.

I originally started as a concept artist, working on mobile games and pitch decks. After a break, I returned to games as a Quality Assurance tester  at Telltale Games, and eventually transitioned into production.

Stygies VIII: Time for the last question! Do you have any advice for aspiring writers, artists, or other creative folks looking to get involved with video games or other media?

LadyNerevar: So much of this depends on where you are and what you're trying to do. I also had a very unique situation in many ways, and with the speed that the industry innovates, advice that was applicable five years ago is completely outdated now. That said, here are a few general things:

Stygies VIII: Thank you for your time, see you somewhere in the TES community!

*Disclosure: Some of the links above are affiliate links, meaning, at no additional cost to you, Fandom will earn a commission if you click through and make a purchase. Community content is available under CC-BY-SA unless otherwise noted.
Advertisement
Follow on IG Newsletter Join Fan Lab