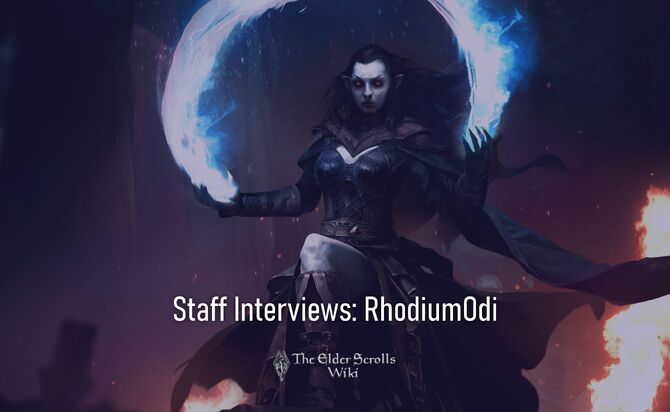 Welcome, readers! This is the News Team's series of interviews with the wiki's local staff. We talk to various wiki staff members and editors. Stay tuned and follow our blog series to find out more about other The Elder Scrolls fans.

Stygies VIII: Today I’ll talk to RhodiumOdi, who’s our dedicated Forum Moderator and takes care of peace and order at the Discussions. They also cared after the Forums when we still had them. Correct me if I’m wrong, but Forum Moderators worked at both Forums and Discussions right?

RhodiumOdi: Hi! Also yes, forum mods were obligated to take care of both the Forums and Discussions, a duty I took very seriously. So seriously in fact, I didn’t do it and had the good sense to let Ottoman handle the Forums.

Stygies VIII: Before we delve into moderator stuff and The Elder Scrolls topics, could you tell me how it all started, how you got involved in wikis?

RhodiumOdi: I got involved through the Discussions board initially and got quite invested in the community. I was the third person to become a staff member that came from the Discussions. First was Carlo, although he’d never admit it. Second was a dude who lasted like three weeks. As you can see I had a lot to live up to. There’s a super long version of the full mod origin story if you want it later.

Stygies VIII: Sure, I was going to ask about that next. So the involvement in debating TES kept you here and led to you becoming a staff member?

RhodiumOdi: Yeah, I enjoyed talking about Elder Scrolls and meeting other people who liked it too. There’s a lot of colourful characters here and it’s a blast interacting with them. Like our own admin, Atv, who has been linked to an underground Woodcutter’s Axe trafficking ring.

There was this guy on the Fallout Discussions who came to our boards and spammed a little. It wasn't too bad, but it was being blown out of proportion by both communities. So, I basically cornered Ssj3xRusticus, a Fallout Mod Admin Guy, and worked some community things out with him. From there, we got talking and he got Fallout calmed down while our mods at the time did the same with us. Ssj3 added me into a Kik group with a bunch of Fallout mods and "trusted members". This was it for several months until he added our very own LilithRayn (Now Khaleesi) to the group. Now, I had never really had much interaction with her until then, but she knew of me and was surprised I was in a mod group. I feel like mod group is overselling it, it was me, Ssj3, and a guy called CobaltJack laughing at one another’s terrible jokes and also Cat being a disapproving mother.

The mod group died around 3 weeks after Carlo joined (Coincidence?) and we eventually moved into a more general one. This continued for a few weeks until Cat posted a link to a thread she just made asking for Mod Applications. I saw this and I wasn't sure whether or not to apply. But then she messaged me asking did I want to so I said yes. Several times. Then I was the biggest lick ass you've ever seen for like five days. Myself and another user did separate interviews for the position which were hosted on Flightmare’s Meerkat Wiki chat. To this day I do not know why Flightmare had a Meerkat Wiki chat and have since made my peace with god that I will never know. Two hours later, Cat announced I was a mod. And all was right in the world.

Stygies VIII: The Meerkat Wiki chat is an unexplored part of the community’s history and it’ll probably remain unexplored to this day. That’s a good origin story from times before our current application methods. Did you divide tasks back then, or is it a current thing?

RhodiumOdi: Well at the time traffic was very high and there was only two of us that were full time Discussion mods. The Ottoman thing is only half a joke, we let him do the forums partly because he had them handled and partly because we didn’t have time. Carlo was promoted to patroller almost right after I became a mod so it was just me and Cat. Mostly you tried to be on as much as possible and do whatever needed done. This is before Off Topic posts were introduced and we’d still get easily 2500 posts/replies on a busy day. Some things were more organised, for instance role play threads were such a hot mess we had to take turns sitting in the thread refreshing the page waiting for people to fight.

Atvelonis helped as much as he could as well but he had a Wiki to run. He’d only been an Admin for around a year (if you haven’t heard Atv’s origin story I implore you to bother him until he tells you) so he was still trying to get everything organised from the mess that was 2015 ESwiki.

Stygies VIII: That sounds like a ton of work, makes me feel good that now we have a bit more people. Me or PA will probably talk to Atv at some point, so expect that! About the issues you mentioned - can you list a few issues you handle most often? Are any problems typical to debates here?

RhodiumOdi: Oh definitely. Back in the yesteryear of 2016 Skyrim’s Civil War questline wasn’t allowed to be discussed for a bit. We had so many problematic posts that we simply couldn’t allow them until people calmed down. It’s the nature of a story that demands a binary choice in allegiance, you’re gonna get people who chose one side calling the other side names and vice versa. I already mentioned roleplays, which got so bad we banned them altogether. Nowadays it’s pretty typical for certain topics to devolve into something nasty.

Again, storylines with a choice are often controversial, for instance killing Paarthurnax (spelled brutally), the aforementioned civil war, anything to do with the embodiment of evil/avatar of the lord Michael Kirkbride, anything of that kind tends to be problematic to some extent. But generally most people are well behaved and just want to talk about the games that interest them, so we do mostly clean up. Putting posts in the right catagories, deleting Low Effort posts/replies, interacting with the community and letting them know we’re there, it’s simple stuff like that we do for the majority of the time.

Stygies VIII: I remember times of roleplays, these had like hundreds of replies. Must have been a pain to moderate. Did you enjoy any topic in particular - or maybe I should phrase this differently - do you have a favourite game / lore topic?

RhodiumOdi: I used to be able to rhyme off everything about the Towers, which are a concept in the lore of the game about these various Towers that are tied to the fabric of reality. Numidium is a famous one, referred to as Walk-Brass, and is currently deactivated. Towers each have stones that power them and without them are deactivated. Deactivate all the towers and the world ends maybe? It’s unclear.

It was my equivalent to Atvel’s Pelinal monologues. Do not let the man start. Aha

Stygies VIII: Hah, right. And what about the games? Which was your first, which is the favourite?

RhodiumOdi: Morrowind for both. I’m one of those people. Genuinely though, Morrowind, I love it. It took until Skyrim annoyed me till I came here though.

Stygies VIII: Morrowind introduced a lot of the lore we discuss now, so I’m not surprised. Any favourite memories about playing it?

RhodiumOdi: Ooo, I suppose my favourite would have to be going to the Clockwork City for the first time in the DLC. I remember being amazed at the visuals and the art style, really magic.

RhodiumOdi: I’m not a massive fan of Online’s use of Morrowind, it always felt kinda hollow, but then again all of Online never really appealed. Just not my kinda thing really. Legends I’ve still yet to try, but I’m sure I will someday.

Stygies VIII: Honestly, I’m a huge fan of the MMO, but still I get that it’s not everyone’s genre. I’d like to ask a few wiki questions now. If you have a new user coming to our wiki community, is there any advice you’d give?

RhodiumOdi: I suppose I’d say try your best to interact as much as possible with the community. Any question you have will be answered pretty quickly and you’ll meet a lot of great people. We’re very lucky to have a welcoming community that doesn’t have many of the problems others like us have in terms of infighting or smaller groups. It’s a nice place, so go out and be nice!

Stygies VIII: if you could improve Discussions somehow, what would you add? Either tools for you, or some feature, anything.

RhodiumOdi: I used to be a crusader for a list of reported posts on mobile, and it never came in the old app’s lifetime. I’d ask for some improvements to the fandom app’s UI because I think it’s pretty poor. For instance I’d been away for a bit and I couldn’t for the life of me find out how to copy the link to someone’s user page from their bios. I don’t know, maybe I’m an idiot, but I just don’t find it very intuitive.

I’d also ask for the old app to stop crashing I miss you son come home.

Stygies VIII: Hopefully these will get fixed or added with the new changes that come with the recent focus on updating things. You surely need more moderation tools at Discussions, too. I have one last question: do you have experience in other communities, or just came to TES and it’s always been your home?

RhodiumOdi: I was active on Fallout for a brief time. Again, it was me and a guy called Cobalt Jack calling each other stupid and making one another laugh. But I’ve mainly been here, doing whatever it is I’m expected to do. I’m honestly not quite sure, and I feel like I’ve been here too long to ask. It’d be awkward.

Stygies VIII: I think you’re doing exactly that and thank you for it. Is there anything to add, anything I did not ask about?

RhodiumOdi: You didn’t ask was I an alt of Crus. I’m not though, so it’s okay.

Stygies VIII: Haha. I was also tempted to ask about the Woodcutter’s Axe gang

RhodiumOdi: I’ve been asked several times to join, but I dunno, seems pretty suspicious to me.

Stygies VIII: Atv will have to answer about it sometime, then. This has been an interview preparing another one for Atv in the future. Thanks for agreeing to do it, see you in the Discussions!

RhodiumOdi: Of course, thanks for listening to me ramble!

Retrieved from "https://elderscrolls.fandom.com/wiki/User_blog:Stygies_VIII/Staff_Interviews:_RhodiumOdi?oldid=3092573"
*Disclosure: Some of the links above are affiliate links, meaning, at no additional cost to you, Fandom will earn a commission if you click through and make a purchase. Community content is available under CC-BY-SA unless otherwise noted.
FandomShop DC Trivia GalaxyQuest