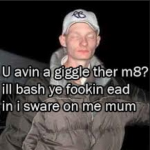 Congratulations, you've made me crave steak because of your amazing name. Now I'm hungry. Also, the Thalmor RP is really getting spread apart. Chronologically, mostly. Our group was on its way to capture Elenwen, but apparently she's already been captured by the Empire? wat. Just wanted to see if there was any sort of consensus I was missing out on or something. TheDirtyMoosey (talk) 03:24, July 7, 2013 (UTC)

Uploading images to post solely on the forums is not allowed. Images on the wiki are for articles and userpages only. Jimeee (talk) 11:07, July 30, 2013 (UTC)

I'm reading back over the scenes we played this morning.  Some good stuff there!  As good a fan fiction as I've ever read.  I really wish Pickle would get his head out of his ass.  He starts something and then wanders off.  I think he has Attention Deficit Disorder.  (Rider (talk) 23:38, August 10, 2013 (UTC))

MOS, I have absolutely no idea how to answer your question without it being extremely awkward for everybody.  You really have no idea why Allysa would cry?  Have you really ever been seasick?  Do you really know what it is like?  It's not something you "get over".  Without medication, I can't stand a boat.  I've got to go or I will be late--maybe I can clue you in tomorrow.  (Rider (talk) 21:31, August 16, 2013 (UTC))

I could not leave you hanging.  Here is the situation.  Allysa knows (as I do) that you cannot get over seasickness.  Some people get accustomed to the motion of the ship but they are not really seasick.  True sea sickness can only be treated with Medication.  She bought a potion to help her past a rough patch, because she knows that if she does not, she'll be too weak and de-hydrated after 3 days at sea to be of any use to her friends.  She is TOTALLY taken aback that Raptor is upset about that.  She felt that a potion that a pregnant woman would use for morning sickness would be safe.  Her mistake was in taking it on an empty stomach.  It made her woozy.  Knowing what she knows, she nevertheless loves Raptor very much and since he is so upset, she agrees not to take the potion. She asks him to leave her alone and let her suffer through it.  He refuses, telling her that he will be there to help her, that he will not let her suffer alone.  It was one of the most beautiful things I have ever seen a man say to a woman--whether in real life, or a book or a movie.  You made ME cry.  I could not think of a thing to have Allysa say or do that would not be totally embarrassing for all of us.  Her logical response would be to cry and throw her arms around Raptor's neck.  I must therefore think of how to get us out of this awkward situation.  I may delete some posts. In retrospect, I should not have made her be seasick--but I had no idea Raptor would react the way he did.(Rider (talk) 22:46, August 16, 2013 (UTC))

Don't worry about it.  I believe I have patched it up--it took some BIG bandages.  I deleted everything and made the response that should have happened.  Who knew everyone would come in and make comments right at that time!  We'll take it from there.  I will be back on tomorrow early, about 12 noon or 1pm your time.  (Rider (talk) 23:22, August 16, 2013 (UTC))

FYI, Allysa knows about seasickness because of a previous voyage which involved a traumatic event in her life, which she has not yet revealed.(Rider (talk) 23:24, August 16, 2013 (UTC))

I learned last night that we are not allowed to delete posts on talk pages, which is why yours keep re-appearing, I guess.  Mine have not been replaced but I have had my hand slapped.  Oh well.  I just wanted to ask if you were going to be on--my lunch starts in 30 minutes--about 6pm your time.(Rider (talk) 16:30, August 19, 2013 (UTC))

(Well you better get in here and stop me from killing someone--or him killing me....)

Mr Steak, do you play SWTOR? If so, what server?

Just so you know that I'm not blowing smoke:

It either does, or does not. All information added to the Elder Scrolls Wiki must be valid. Content based on assumptions will be deleted, as this does not provide the reader with standard quality-information.

As one myself, I'd like to point out that you, on several instances, missused our great and infamous title.  It should be Grammar NAZI, as NAZI is actually an accronym.  Just saying, Ability is what you can do, motivation is how much you do, attitude is how well you do it. (talk) 22:34, October 9, 2013 (UTC)PsijicThief

I am so lucky to encounter someone with an exquisite name such as yours. In standard, it has a similar structure. "Man of". It's wonderful, simply wonderful! Mer and steak! (Though the two don't correlate)! This was nice, Man of Mer

Your comment on my story really hurt me, MOS.  You hurt me more often than not.

Yes, I will agree with that assessment.  You see, I had no idea you thought it was a good story with that comment.  I don't do well with sarcasm.  Sarcasm is a tool for hurting people.

Cool, I will try and use this. But I will only really use it for actual suspects.

Some random customer told me I looked Irish today. Other people I have mentioned this too have said that I do not. I am not sure, how exactly does one look Irish? Do I need to hold like a potato or something? I am very confused! Anyways, I am off to sleep now, as it is nearly 1 am. Timeoin•Say G'Day•View my work 14:53, December 27, 2013 (UTC)

Man of Steak, I have not trolled Lyra. I simply stated an opinion on the chat, she on the other hand told me to "go suck a dick" and called be a Neo-Nazi because of it. In addition would purposely egg me on into a debate. I did not try to have this happen, and I did not troll her. If Lyra told you anything else she is lying to you in order to avoid getting in trouble because of it. You can ask other users such as Draevan13 and Ikabite about Lyra's behavior on the chat. Zippertrain85 (talk) 01:08, January 18, 2014 (UTC)

Where are the chat moderators when this is going on, and where is the proof of this cyber-bulling? I cannot ban Lyra or Zipper based on what someone passed along to you. There needs to be documented evidence that one user is trolling/baiting/harassing another. This can be done by taking screenshots of the chat window that shows exactly what is being said.

I don't doubt that there has been disagreements that have gotten out of hand in the chat, but, I cannot take one persons word over another. If there is bad blood going on between Lyra and Zipper, both need to stop engaging each other in conversation since it seems to only lead to more flames. —TombRaiser SPEAK! 02:35, January 18, 2014 (UTC)

Regarding the complaint against Zippertrain85 by Lyra

I was on the chat a few nights ago when Zipper and Lyra were online. To put it bluntly, she is full of shit if she claims Zipper is the one harrassing her. From the moment I logged on and Zipper said hi to me to when I logged out, Lyra was harrassing Zipper, mocking him, insulting him and trying to provoke him into arguing with her, with no success as he didn't take the bait. If she's trying to make it look like she's the victim, then she's a damn liar. I might argue occasionally with Zipper, but to see him banned because of that something LYRA did is too much. I don't know if this will help Zipper, but I have to say something.

To put it plainly I am confused. Both sides are telling different stories and providing proof. I don't know who to trust or who to believe. Is there any way to go through the the users converstations on chat? Zu'u lost daal. Alduin1996 (talk) 12:04, January 18, 2014 (UTC)

It's alright. We all make mistakes sometimes, and at the end of the day the right person got what they deserved. So everything worked out. I'm just curious, why did you think it was me? Zippertrain85 (talk) 16:56, January 18, 2014 (UTC)

Hey Steak, yeah I was having that problem too. I posted on the page then later I went to look at it and my post was gone. I was rather strange...but its fixed for me. Here is what my post was:

Caesar went over to the commander. "I'll go first." he said and jumped down the trapdoor. He began casting a very weak lightning spell just to create some light in the darkness. He also drew the dagger he had on his boot. Talos guide you Kinsmen Speak Citizen! 17:28, January 27, 2014 (UTC)

Hi hi. Just got done with my first review of your blogs, just wanted to let you know. Have a nice day.

oy Kenny, someone banned me from chat as soon as I joined?? It said to contact an admin, then sent a message saying " inappropriate user name" didn't you tell me it was fine? Is that seriously up to the whim of some rando on a comp? --Catbuttholes (talk) 22:03, July 15, 2014 (UTC)

Retrieved from "https://elderscrolls.fandom.com/wiki/User_talk:Enda_Kenny?oldid=1641396"
*Disclosure: Some of the links above are affiliate links, meaning, at no additional cost to you, Fandom will earn a commission if you click through and make a purchase. Community content is available under CC-BY-SA unless otherwise noted.