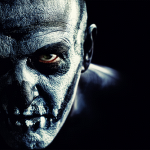 Well hi there..I'm sorry if you think it's unnecessary but I just thought it was a cool little tid bit to add. How do you know for a fact that it wasn't indeed that? I don't think you do. So what was actually unnecessary was to keep deleting it because YOU thought it was unnecessary. Not only does Endrast do this when he dies yet again, but all the others that were trapped and died in there as well. For example, one of them says "Free again." I'm well aware that some of the NPC's say things like that, but not all of them in a specific location that happened to have a story behind them. Went there looking for something, Falmer got them and such, and it goes on and on with the story. So just because you have an opinion doesn't mean it's correct, and I'd appreciate if you respected my, as well as every one else's opinion on here. If you wish for people to respect your own opinions, you must do the same for us and not delete things and not send messages about how YOU THINK it shouldn't be there. That's your opinion, and my opinion was, it was a cool little tidbit to add. So that's what I have to say to you. Sorry to come off like a jerk, or whatever else you want to call it, but this website is full of bias, good luck trying to tell everyone who's ever posted an opinion on here that they're wrong. DragonPriestess (talk) 03:56, January 15, 2015 (UTC)

Stop. Just stop. It was an opinion that it was not necessary. It wasn't a fact in any way. So don't tell me it wasn't your opinion. Okay? Get it? Got it? Good. Now stop acting like you own this site and that you're always right. DragonPriestess (talk) 04:18, January 15, 2015 (UTC)

Ah, sorry to hear that. It was just to talk about the fact that two of our most active sysops have resigned and what your thoughts were about it. If you don't want to talk about it on talkpages, that's fine.
On another note: just wondering if you've got Steam? Don't think you do but wanted to ask :P --SuperSajuuk Talk Page | Contribs | Channel 17:45, January 16, 2015 (UTC)

Huh, it looks like you actually can get the link to work as well as the message given when the link is hovered over. An example is on Legacy of the Dragonguard. So we have to do {{sic|[[real spelling|mispelling]]|mispelling}}, I think. Not sure how I didn't realize that until now... ―Atvelonis (talk) 04:09, February 11, 2015 (UTC)

I think it's pretty interesting to have translations of names and the like on articles; lots of the translations reveal some sort of connection between the game and real life. It's not like all of them are really that important, but I also don't think it's worth going around and removing all of the translations on the wiki (because it is mildly interesting that these connections exist), but you can go ahead and remove this one if you really want. Perhaps this is something that is better suited for the talk page of the article. ―Atvelonis (talk) 17:01, February 1, 2015 (UTC)

In regards to these, it's probably better to just hit undo with no reason and ignore. I've set up an abuse filter (which isn't yet live) that will stop these edits from being made, as it's obviously minor vandalism (but nothing worth a blockcheck report :P) to the wiki and I've seen it going on for a very long time now. So yeah, probably just easier to undo without giving a reason for such edits. --Sajuuk talk | contribs | Channel 10:00, February 2, 2015 (UTC)

No worries on the image size issue. Someone beat you to it. I'm working my way back around to them all now that the screen is working properly again. Shame whoever chose that size didn't go with something slightly smaller, like 500x900. :D Anyways, thanks for the heads up. You guys keep on me, I'll figure it all out just in time for things to change. :PGaminomicon (talk) 02:40, February 4, 2015 (UTC)

No the above line is for you. I got your message about having an image still at the wrong size. Adding the barbarian if memory serves. He's on my list to fix. Thanks again. :)Gaminomicon (talk) 03:06, February 4, 2015 (UTC)

I block him for a week. He did some trolling earlier today besides what you reported him for. Thanks for reporting him.-Cheatcodechamp (talk) 04:11, February 6, 2015 (UTC)

Hey Erik sorry about the grammatical errors in the Nerevarine page it was me who did the info that was not present and it was me who made all those mistakes if you mind do you think that you can fix the mistakes I made cause if I do it I might make it worse thanks (Dragon Boy 252 (talk) 04:36, February 28, 2015 (UTC))

Hey Erik I was wondering if you can help me with the Lich lore page as I know how to source just not really good at it if you could help the page by helping me look for information and some images and if you do find some information could you help me by adding it thanks (Dragon Boy 252 (talk) 06:59, March 7, 2015 (UTC))

Hi Erik. I saw the report you left, however I should also inform you why that wasn't vandalism.

Wikia released a VisualEditor on the site several months ago, which is heavily modified from the one used over on Wikipedia and Wikimedia. So while it's essentially an official extension, there are several bugs with the modified version from Wikia. The main bug is when a user edits and it simply submits an edit that would appear to look as though it was deliberate vandalism, when in reality, the user was actually trying to add something which was then submitted as page blanking.

These kind of contributions are not intentional vandalism. If a user has blanked the page, please check the page history to identify if they were using VisualEditor: this can be seen with (VisualEditor) written next to the page revision. If the user has indeed used the visualeditor, simply revert and inform the user via their talkpage to change their editor preferences to use Source Mode, rather than reporting it as vandalism.

However, if the user page blanked and it wasn't with VisualEditor, you can continue as normal and report it as actual vandalism as it would be clearly be intentional to disrupt the site. I have seen this happen multiple times on other wiki's so I can understand why it may have looked like vandalism, but it isn't in this case.

Some users don't have issues with it, but there are users I have seen being blocked because of unintentional page blanking caused by it and they were actual legitimate contributors who improved the wiki.
I should note that this is not Wikia's older "Classical visual editor", but a different one (eg: Click this to see the newer VisualEditor) and it causes some issues as a result for different users.
So yeah, it's a bug and not real vandalism. Please do trust in that I know what I am talking about in this case. :) --Sajuuk talk | contribs | Channel 16:01, March 21, 2015 (UTC)

Hey, It took me longer then it should, but I noticed you haven't been around lately. I know we didn't talk much but you where here alot and I wanted to make sure everything was OK.

Well a new job is a good reason to put less time into the wiki, I have always said real life comes first. I do hope that you return once you get the hang of things.-Cheatcodechamp (talk) 19:28, April 15, 2015 (UTC)

Hey Erik, since you've been gone a little while you missed some of the policy updates we did. One of them was that bugs don't have to be confirmed on the talk page before being added (because getting them confirmed is virtually impossible). Obviously if something is completely ridiculous like, "Adrianne started doing the tango with Balgruuf" as a bug then it can be removed. Another is that speculative trivia is mostly allowed now (with evidence of course, it can't just be pure speculation). CTs found here and here, respectively. Happy editing! —Atvelonis (talk) 13:28, May 31, 2015 (UTC)

I think the trivia about materials is warranted, given the fact that they are referred to as such in the resource files and the textures basically give it away. I don't think it's a stretch at all to say Hevnoraak's mask seems to be made of iron. Enderverse (talk) 21:40, June 2, 2015 (UTC)

I reported a glitch on Warmaiden's... It was a glitch... Why did you removed it?

Thanks for editing that article man. :) I can't believe I missed writing they are armor :P

Hey, haven't seen you since January. I hope everything is Ok for you, I hope that nothing serious is going on. I hope to see you around the wiki again soon.

Well congrats on the new admin post, you have put a lot of work in here so I have no doubt they benefit from your assistance. If you guys ever need anything feel free to ask, No reason wikis cannot assist on another when needed. We always have work that needs done, I have been combing youtube for shots we can use for our images, as it is the only way I can find images since I do not own ESO. You are always welcome here, and if we can help with anything you have only to ask.Cheatcodechamp (talk) 00:07, September 24, 2015 (UTC)
enjoy the adminship. Just remember ... It may be a mess *now* ... but it CAN be improved with time. When I started, we were that bad that the only comments we got were "when is it getting shut down." Timeoin•Say G'Day•View my work\

Hey Erik, just wanted to thank you for lurking here all the time and reverting vandalism and all that, it's super helpful. So thank you, hope to see more of you around! —Atvelonis (talk) 01:09, March 8, 2016 (UTC)

Hey! I know I've said this before, but I really appreciate the work you put in reverting poor edits on the wiki. It is genuinely fantastic to have someone as experienced and competent as yourself keeping an eye on things. I know you're probably busy with other wikis, but it's great having you around here—you're as handy as any of our patrollers! —Atvelonis (talk) 04:18, November 21, 2016 (UTC)

Retrieved from "https://elderscrolls.fandom.com/wiki/User_talk:Erik_the_Mad?oldid=2282148"
*Disclosure: Some of the links above are affiliate links, meaning, at no additional cost to you, Fandom will earn a commission if you click through and make a purchase. Community content is available under CC-BY-SA unless otherwise noted.