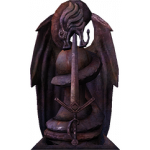 Hello KnightOfAkatosh, welcome to the Elder Scrolls Wiki! We're building a collaborative source of information for The Elder Scrolls, and we need your help!

Hi, maybe I'm not the person to ask as I have never delt with bugs actually... the section should list bugs and a solution if possible. One should follow the "rules" in the template above though. I suggest you ask another of the admins too.. like Jimeee. —EbonySkyrim Message! 19:31, August 3, 2014 (UTC)

Hello there, I don't mind really and sorry i just thought that adding the conditions of Dark Brotherhood being destroyed and the Stormcloaks winning the civil war would be the result of Commander maro living in Dragon bridge's village. Tesshu (talk) 21:43, August 6, 2014 (UTC)

Actually, in the Helgen Keep, when you exit the torture chamber, in the room with all the skeletons, in a hanging cage is a dead stormcloak. Looting him reveals leveled gold and a pair of ragged trousers. Zoomer364 (talk) 18:12, August 9, 2014 (UTC)

Hey, keeping it on both section and template would be optimal, not to mention it's the currently in use standard. Hope this helps. —Sky Above,Voice Within · Show thy Voice! 21:40, August 11, 2014 (UTC)

Hey - I just made some edits to your updates to the Unbound article. While in general the information was good, there was one peculiar thing - you seemed to be avoiding using articles (e.g. "the", "a"). This is most important when referring to "the Dragonborn". Just saying "Dragonborn" is poor English. See the changes I made do see what I think is better. Let me know if you have any questions. Happy editing! Cubears (talk) 03:56, August 12, 2014 (UTC)

Just wanted to thank you for marking Felen's Ebony Staff, that was one of the worst articles I have seen in awhile. I also wanted to let you know that since you marked it, I was able to bring it up to standards, so good work.

Are there followers who can't be Blades? Edit

I saw the changes you made to add Rebuilding the Blades to the services for many followers. I'm wondering, though - are there any human followers who can't join the Blades? If all human followers can join the Blades, then there's no reason to distinguish between this and follower. If there's even one follower who can't, then that's enough. But I can't think of one. Cubears (talk) 16:22, August 24, 2014 (UTC)

Duh! OK, missed that. Thanks for clarifying. It would be useful to track that down, but that probably would be more easily done by someone with the PC version and the Creation Kit. Cubears (talk) 16:33, August 24, 2014 (UTC)

Hey KOA, if you're going to add those links to the pages please remember to link them correctly, otherwise you leave a trail of red links in your wake. Thanks. Ȼǿᵰᵮẽᵲ ₲ħǿśᵵ Ⱥᵰᵾᵬĭᵴ Đẽẽᵭᵴ 15:01, August 29, 2014 (UTC)

KOA, there is no need for you to add the new class link to every character in Skyrim. This can be added if something else is added, what you are doing can be seen as badgehunting I'm afraid, even if you don't mean this. —EbonySkyrim Message! 15:19, August 29, 2014 (UTC)

If you want something to edit, look through location articles or caves or something like it and seeif you can improve. —EbonySkyrim Message! 15:24, August 29, 2014 (UTC)

http://elderscrolls.wikia.com/wiki/Cast_Adrift?diff=1685148&oldid=1685144 about this edit. That was my mistake I forgot you were't supposed to add Appearances to quest articles. Thanks, for reverting that, I'll have to write that down somewhere so I don't forgot. Starkiller131 (talk) 18:31, September 8, 2014 (UTC)

Sorry KoA, I didn' get back to you about it. I was exhausted and still am. I'm going to archive the page in case User:Cubears, who started to go through it, want to continue. Or someone else. Thanks —EbonySkyrim Message! 18:46, September 15, 2014 (UTC)

Re: Images to be removedEdit

No, because there missing images, but they also do not have their stats nor their Ref ids. The pages also look empty & need to have more added to them. Ȼǿᵰᵮẽᵲ ₲ħǿśᵵ Ⱥᵰᵾᵬĭᵴ Đẽẽᵭᵴ 18:06, September 22, 2014 (UTC)

It looks empty because not enough information was added to the pages KOA. Stats are not unnecessary in anyway, that's your opinion, & you're entitled to it. But we do add them here, as does similar wikis. Not the Ref id alone no, but have you even read the pages? The leads & information them is extremely limited, not to mention they don't even have the images on them either. Ȼǿᵰᵮẽᵲ ₲ħǿśᵵ Ⱥᵰᵾᵬĭᵴ Đẽẽᵭᵴ 18:35, September 22, 2014 (UTC)

KOA our FA articles mostly have those things on them, it's called being thorough. Look at the Neloth page as a reference. There is a legitmate reason it's one of our best articles here. Take a look at the farmers page now, I completely remade it. Ȼǿᵰᵮẽᵲ ₲ħǿśᵵ Ⱥᵰᵾᵬĭᵴ Đẽẽᵭᵴ 20:49, September 22, 2014 (UTC)

Hey, KnightOfAkatosh. Just wanted to inform you that we are looking into the removal of the Bugs (Skyrim) article, as it has been quite a while since anyone has said anything about it's proposed removal. So, I have made a post on the Bugs (Skyrim) talk page. Please check it out when you have time, and feel free to add your feedback or anything else on the subject. Link here. Thanks :) —TombRaiser SPEAK! 02:49, October 8, 2014 (UTC)

Re: Images to be deleted IIEdit

Hey KOA, I deleted some of the images, but I left a few of them as well. While you're correct they should have a background, some of them are the only images of said character, & serve as the main image of the page, which is better then not having an image. I left those as it would be just be better to add the {{{Imagequality}}} template to said pages so that we can know which images need to be replaced. I also renamed both of the badly named ones, thanks for the help :) Ȼǿᵰᵮẽᵲ ₲ħǿśᵵ Ⱥᵰᵾᵬĭᵴ Đẽẽᵭᵴ 06:41, October 15, 2014 (UTC)

Re: Pages marked for deletionEdit

Hi KOA, right now it's only me doing the deletions and I hadn't looked since early yesterday morning. I have now deleted all except one, there are many links that link to this page, the other only had less than 10-15, but the last one I'll do when I get homw. You mustn't forget to look at "What links here" under My tools before karking it for deletion. Those links has to be fixed before deletion. EbonySkyrim Message! 12:07, November 3, 2014 (UTC)

Have a sweetroll fishy stick Edit

Hi KOA, I have asked him to stop or he will be blocked. He has been missunderstood before so I'm giving him this chance to do as I say before I do anything more. EbonySkyrim Message! 21:14, November 11, 2014 (UTC)

I put him on aprobationary block for a month again. If this doesn't help again he will be blocked again. EbonySkyrim Message! 21:41, November 11, 2014 (UTC)

Hi KOA, I have removed the block on him, he wasn't breaking any policies and after talking to another admin today I decided to unblock him. He needs guidance and help. I don't know if he'll see it but I'll keep and eye on him. EbonySkyrim Message! 14:08, November 12, 2014 (UTC)

While I was browsing the Dwemer pages today, something suddenly dawned on me that I could post as a subbullet to a trivia I'd seen on the Aetherial Staff page a while ago, --one that suggested it worked by opening a Time Wound--, only to find that you'd erased the trivia on bounds of it being speculation, shown by this revision history. I understand that as the way the post was written it definitely seemed to be speculation; however, the idea that I would have liked to add to it would have drawn it closer to actual lore by expanding on the very same Time Wound theory, meaning that it could very well be one step closer in changing from speculation to fact.

As of such, I would like to request your permission to revert your removal of said trivia and continue on the development of this idea. It seems very possible to me that the staff does indeed bring fouth its conjurations from the past in such a manner, perhaps even directly from the original workshops where they were manufactured long ago; drawing possible reason that when it summons miscelaneous parts, the targeted Animunculi it would have summoned was as of yet unfinished.

Please consider my request and reply with your decision on the matter. I do hope you agree in favor of my idea, however, if you feel strongly that the removal was still for the benefit of the page, I will respect your choice. Also, if that is the case, a possible compromise would be to instead ressurect the topic in a separate page dedicated solely to the advancement of the conjecture. Either way, I would like to hear your opinion before proceeding, as going about it blatantly would make me appear reckless and impatient.

Retrieved from "https://elderscrolls.fandom.com/wiki/User_talk:KnightOfAkatosh?oldid=1866084"
*Disclosure: Some of the links above are affiliate links, meaning, at no additional cost to you, Fandom will earn a commission if you click through and make a purchase. Community content is available under CC-BY-SA unless otherwise noted.