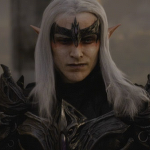 The edit summaries are for summarising the edit you are making, please do not make edits just to talk to users, nor for stating that you liked certain quests. I've already noticed a lot of your edits are pointless just to write unnecessary edit summaries, that's not what it's for... --SuperSajuuk Talk Page | Tabber Code | My Contribs | Channel 13:13, December 16, 2014 (UTC)

It's hard to tell what edits you are making, because your edit summaries are just random chatter.
When editing, you should explain the edit you are making in the summary, don't write nonsensical and irrelevant summaries like "I like Erandur a heluva lot more than Benor, whom I basically used as a pack mule." or "I really liked that quest. Someone looking for redemption for something he's done in the past." How are users meant to see what edits you are making if you are writing useless summaries?
When I looked at your edits, it was impossible to see what edits were really made because your summaries are irrelevant. --SuperSajuuk Talk Page | Tabber Code | My Contribs | Channel 13:40, December 16, 2014 (UTC)

I shouldn't need to look through the changes made to find out what edits you've made, I should be able to read the summary and understand the edits you've been making, especially as it's very difficult to see extremely minor differences between edits. You managed to write a valid summary here, which is what I was asking you to do. --SuperSajuuk Talk Page | Tabber Code | My Contribs | Channel 14:19, December 16, 2014 (UTC)

Hi, why are you also adding unnecessary spaces in each article you edit? You should write an edit summary if you have done a lot of changes so other users don't have to do look for the changes made. EbonySkyrim Message! 17:30, December 16, 2014 (UTC)

Adding an edit summary with those words you just did on Arondil, is not very nice. Stop doing that and add correct summaries as we have asked you before. EbonySkyrim Message! 13:31, December 26, 2014 (UTC)

Another reminder about your irrelevant edit summaries. Please stop using it like a talkpage, they are for explaining the edits you make to the wiki, not to talk to people. --Sajuuk talk | contribs | Channel 13:46, January 20, 2015 (UTC)

Frankly, I'm tired of always having to explain myself to you.

That's really not the attitude to take when editors make requests to you. I see you have rights on other wiki's, I very much doubt those other wiki's allow you to make unnecessary edit summaries. You can discuss it with another user (eg Atvelonis) if you feel so inclined not to listen to me :) --Sajuuk talk | contribs | Channel 13:22, January 21, 2015 (UTC)

An edit summary of "Is there anything in the game files that could explain what this place is for, other than an adrenaline rush fall down a deep hole?" really doesn't help when you did little more than move a paragraph and add a header.  Like Sajuuk said, you shouldn't use the edit summaries like a talk page. - Erik the Mad (talk) 13:14, February 3, 2015 (UTC)

Despite numerous requests to stop, you still seem obsessed with using edit summaries like a talkpage. I'm going to reiterate myself: edit summaries are not for talking to editors. If you cannot describe your edit, do not write a summary.
I'm surprised that I need to bring this up, because the majority of your edits don't really require you to write a summary, so I'm not sure why you keep falling back to writing talkpage-esque summaries.
I also don't know why I have to bring it up, because you have additional rights on other wiki's, so you should exactly what they are supposed to be used for.
If I have to ask you any more times about irrelevant edit summaries, I may need to contact a sysop to intervene again. To reiterate: keep it relevant or don't write one.
Thanks. --Sajuuk talk | contribs | Channel 05:52, April 10, 2015 (UTC)

FA have been locked here since long before I was admin. It might be changed though. EbonySkyrim Message! 15:10, January 1, 2015 (UTC)

Hi Leea, some quotes are said by many, others by few. The quote you removed from his article is said by Dunmers and you can find it on their pages too. So please don't remove any quotes because someone else also say it. EbonySkyrim Message! 16:26, January 4, 2015 (UTC)

You seem to make a lot of minor edits, it might be appropriate for you to change your preferences so that the "Minor edit" tickbox is always marked when you edit. --SuperSajuuk Talk Page | Contribs | Channel 12:58, January 12, 2015 (UTC)

Do you have Xbox live?

Hey Leea. Quest names are supposed to have quotation marks around them (policy on it found here), so please don't remove those. The only times you wouldn't use quotes around quest names is if they're in a heading or in a list of quests. Thanks for your time, and happy editing! —Atvelonis (talk) 16:11, March 21, 2015 (UTC)

Hey Leea, thanks for your help removing that guys' category edits and for reporting him to Atvelonis!

Hey Leea, I saw that you've been adding a bit of conversation dialogue to characters in Skyrim. This is something we use blockquotes for, to make the dialogue easy to read. So if you want to add more conversations between characters it would be best to use blockquotes. Here's an example of how they work (they're actually quite simple):

hello leea sorry to bother you but i need some help with the skyrim mods and i noticed you play skyrim and your active i need your help , i have been trying to download the defeat dlc and Sx,lab and other requierd mods for these dlcs but i cant get access to them since they have been removed from all download links, i was wondering if you have them could you pleeease email them for me to (sparrowpirate1@gmail.com)??? i willl be greatly thankful

Hey, sorry this took so long (I have been a little behind on watching Recent Changes lately), but would you mind explaining this edit? I'm not going to berate you on the summary because I honestly don't care but I'm a little more concerned about the removal of valid content. Was removing that list an accident or is there an actual reason for it? Thanks. Happy editing! —Atvelonis (talk) 04:25, December 13, 2015 (UTC)

Hey Leea. You can use a type of blockquote for dialogue between yourself and an NPC called a dialogue box. Works pretty similarly to a regular blockquote:

You use indents for another branch of dialogue that can be accessed after selecting one option, and a new box for a new tree, as it were. Some examples on here or here, though for the most part I prefer plain indents over bullets (unless it's something like Ulfric's "How goes the war?" option in the first link) because it's a little cleaner. —Atvelonis (talk) 00:37, January 16, 2016 (UTC)

One other dialogue thing that might interest you. For stuff like this where the comments are dependent on something I like to use a type of table to show them. I'm not that great with tables and I'm also kind of lazy so I haven't gotten around to updating all pages for it yet, but here are a few examples: Ulfric, Mjoll, and Neloth. Pretty neat. —Atvelonis (talk) 17:49, February 20, 2016 (UTC)

Hello Leea! I hope all is well,

I'm leaving you a message today regarding formatting of the <div class> edits you have been doing lately. They look quite good, and I would like to thank you for adding them. However, as just a little note, the wiki has changed the linebreak formatting from <br> to <br />. This little change might not seem like much, however, leaving the br without a / doesn't close the newer XHTML formats, and thus, may not work on future computers well, as well as a few today.

Other than this very small little note, your edits are awesome!! I tried adding quotes for Oblivion once however, I couldn't stand it. You're making magic in my eyes with these edits.

Keep up the awesome work, and if you have any questions, feel welcome to drop a message back by my talkpage. Thank you, and have a nice day! The_CrusaderTalkpage02:58:31_April 05, 2016

Re: Picture problem on article Edit

That took a little longer than it should have, but I uploaded the new image to the wiki just now. Let me know if you see any more images that need replacing. Thanks! —Atvelonis (talk) 15:37, April 22, 2016 (UTC)

Well the Summerset Shadow that showed up when I used that Base ID (image) was pretty similar to Linwe. His armor had sleeves though (also, his hood covered his eyes, so it was tough to get a decent picture, hope the one I got works). —Atvelonis (talk) 15:44, April 25, 2016 (UTC)

Hey, I just wanted to say thanks for your continued dedication and hard work here (especially the quotes), it's much appreciated :) Not sure if it was made clear before, but we really are grateful for that. --Shockstorm (talk) 14:36, May 31, 2016 (UTC)

—CarloV3r (talk) 12:11, March 19, 2017 (UTC)
Retrieved from "https://elderscrolls.fandom.com/wiki/User_talk:Leea?oldid=2428439"
*Disclosure: Some of the links above are affiliate links, meaning, at no additional cost to you, Fandom will earn a commission if you click through and make a purchase. Community content is available under CC-BY-SA unless otherwise noted.