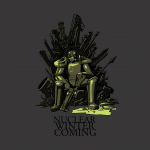 I was just wondering if Balgruuf the Greater can be "killed" by Molag Bal in the mines and become Balgruuf the Badass. Pickleseller (talk) 05:52, July 3, 2013 (UTC)

No, I have another idea for the pyramid. Either way the pyramind is only supposed to be present for a time. The real adventure starts when they get out. Nelthro (talk) 16:33, January 24, 2014 (UTC)

Regarding the Elder Scrolls NovelsEdit

So I noticed on the C0DA/Canon Wars Thread that you wanted proof that the two TES novels, Infernal City and Lord of Souls, were considered canon by Bethesda. The people on the thread didn't give you a good answer when there actually is one. There is actually in-game proof for that they are canon:

Skyrim contains the Thalmor, the Red Year, the Argonian Invasion of Morrowind and the Mede Empire. These concepts were all created by the TES Novel author, Greg Keyes, and first appeared in the TES Novels in 2009, years before Skyrim came out in 2011. Ergo, the novels are considered canon since Bethesda used the TES Novels' canon in their games. Also, in the novels' foreward, Greg Keyes states he worked with Bethesda to ensure his books were accurate to TES lore.

I saw your message on my talk page and I find that idea interesting. We've done the impossible, and that makes us mighty

Retrieved from "https://elderscrolls.fandom.com/wiki/User_talk:Nerevarine465?oldid=1653362"
*Disclosure: Some of the links above are affiliate links, meaning, at no additional cost to you, Fandom will earn a commission if you click through and make a purchase. Community content is available under CC-BY-SA unless otherwise noted.