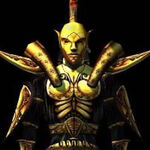 Hello RhodiumOdi, welcome to the Elder Scrolls Wiki! We're building a collaborative source of information for The Elder Scrolls, and we need your help!

Tiber Septim, as stated in the 36 Lessons is the "two-headed ruling king." The meaning behind this is explained in other sources.

The second to see the Brass God was the Enantiomorph. You may know them individually as Zurin Arctus and Talos. The Oversoul was known to the world as Tiber Septim They gave birth to their Mantella
-source

Basically, Tiber Septim, in this sense, is the collective view of Zurin Arctus and the General Talos as a single individual. Its something that's kind of hard to explain in full but essentially, rather than defeating their opposite to become the ruling king, Talos and Zurin united as one (according to the same source I posted Talos eventually comes out on top, but that's a different story).

Nerevar was never really the Ruling King, more like destined to become him. That's what the 36 Lessons is mostly about, Vivec is preparing Nerevar for his coming role.

About the Snow-Throat, we don't really know what the stone is, there are a lot of theories but nothing conclusive. Some people interpret the line "When the Snow Tower lies sundered, kingless, bleeding" from The Book of the Dragonborn, to mean the Tower has been deactivated, but we can't be sure of that either.

Perhaps in the future when someone trys to bring attention to an actual problem in the fandom world you should work with them and use that post as a focal point for learning what you and your administrators are doing wrong. Obviously its a problem because someone commented on it and I'm sure if you would have allowed it to stay up there would have been more...68.113.181.207 22:19, February 6, 2017 (UTC)

Did you message� me Odi? I'm on Kik for a while, or you can try my steam, http://steamcommunity.com/id/Karan42

Hey Odi, just wanted to know what your steam was.

First of all, I want to apologise if this is crossing the line. I've come here to ask for a chance. I'm aware that before I joined, a load of bad stuff happened, and that the mods simply don't want the /d to descend into chaos. But is there no way of allowing our 'cult' to exist? Maybe you could give us a chance to prove we won't become a nuisance, and if we do, then simply don't allow it. I know that it's just a joke, and that you're doing your job, but it's kind of like a community space for a lot of people. And it would be cool if our little 'guild' could continue its existence.

If you decide to give us a chance, please just let us know of what's allowed and what's not. If you don't, then apologies for wasting your time. And, as I said, if this is too much then I sincerely apologise.

Thanks you for your time.

Have I been blocked? I can't sign in on the app, and was wondering if that was the reason. If so, would you mind telling me why? Thanks.

Also, thank you for responding to my post about 'Kennyism'.

Hey, is there a way to contact you on social media regarding something Disturbed and confused (talk) 03:39, October 3, 2017 (UTC)

The deletion didn't bother me all too much, but what was the reason of deleting it? It was fine; no rules broken. It gave feedback and was approved by the original poster with a reply from them. Please reply on my talk. Cheers! (Also, asking because this happens frequently when I reply on the same post you reply on. Naturally curious.) --  Aquila2002 * Talk? * Chat?

I wish you a very Happy New Year! Please do check the following post and tell me what you think![1]

Retrieved from "https://elderscrolls.fandom.com/wiki/User_talk:RhodiumOdi?oldid=2541800"
*Disclosure: Some of the links above are affiliate links, meaning, at no additional cost to you, Fandom will earn a commission if you click through and make a purchase. Community content is available under CC-BY-SA unless otherwise noted.