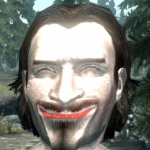 Amaund is evil or not? Edit

Hello there how are you? I would like to ask if you are really sure that Amound is not the main antagonist because he is evil if i am not mistaken, he wants the ruby throne and the Emperor dead, if that does not sound evil then i don't know what evil is, lol. Tesshu (talk) 22:36, August 14, 2014 (UTC)

If you choose to destroy the DB then they will be the main antagonists, about Vitoria Vicci well she is selfish and snobbish but she is not a cold blooded killer. Tesshu (talk) 23:00, August 14, 2014 (UTC)

That is why i choose to Destroy the DB, the dragonborn in my opinion would never join a group of assassins and murder people in cold blood because i mean the player can even say that in the quest "No one escapes cidhna mine" to that orc, Borkul the beast. Tesshu (talk) 23:20, August 14, 2014 (UTC)

Hey sky, I forgot that RP wikia IP, could I get a link to the talk page?

Sky, this morning, my dog was acting weird. If we touched him, he was shouting. So, May i ask you how you saw that your dog had the diarea ? Because, he really is weird for few reasons :/Emperor Jarjarkine

On the topic of KINMUNE Edit

Regarding KINMUNE, what the fandom considers canon is irrelevant. KINMUNE is tangential to the actual lore, and since it contributes nothing in the way of knowledge toward acknowledged canon, it doesn't really belong on the page. That the fandom acknowledges it as canon makes it little better than fanon. 67.162.157.155 07:16, August 23, 2014 (UTC)

Hey, just thought I should let you know that you should check your signature as it isn't leaving the required timestamp data. I fixed the issue on Talk:Bilegulch Mine, but just wanted to let you know in case it's a bug on your end (or if you accidentally signed with ~~~~~ instead of ~~~~) --SuperSajuuk Talk Page | Tabber Code | Channel 10:27, September 7, 2014 (UTC)

How long. am i banned? —This unsigned comment is by Drafinizer (talk • contribs) . Please sign your posts with ~~~~!

Txn for the help with the article about keys here have a (sweetroll) —This unsigned comment is by Drafinizer (talk • contribs) . Please sign your posts with ~~~~!

Well in case you didn't see it Sky it was already dropped, & were already discussing it on the chat. So I don't see why you're messaging me about this. You're welcome to give your opinion on it too though, just as I am, & just like Harold is, that doesn't mean I need to agree with it. Ȼǿᵰᵮẽᵲ ₲ħǿśᵵ Ⱥᵰᵾᵬĭᵴ Đẽẽᵭᵴ 02:51, September 13, 2014 (UTC)

Hello there, this is not a matter of source but of analisys, as you can see Valenwood was conquered by the the third aldmeri dominion and so they set the Rules of the Altmer in the province and the bosmer are forced to follow their rules(The Altmer culture does not include canibalism.), also the thalmor does regular purges to the bosmer, this is likely because there are bosmers who refuse to do the Thalmor's bidding. Tesshu (talk) 18:03, September 13, 2014 (UTC)

Hay Sky, well...i heard you are going to leave us ? I am kinda sad to hear this but, thx alot for everything you've done for the TES wikia. I dont know what happent but, you really was a great and amazing friend and editor. I liked to be your apprentice and if you ever come back, i,ll be waiting for you :)Emperor Jarjarkine

Ah Sky, I'm so sorry but I think it's a good decision you are doing, taking care of yourself. I'm sorry though that things have happened here that made you feel this way. Take it easy and relax, then come back and if I'm still here, I'll be looking forward to see you. :) EbonySkyrim Message! 18:31, September 18, 2014 (UTC)

Hello I just wanted to let you know how much help you've been to me on this wiki. Thank you for all the advice you've given me, it's helped me a lot. I also want to thank you for contributing so much for this wiki, you've put a lot of time and effort making this wiki the best around. Thank you and God bless, --Greeno200 (talk) 05:07, September 26, 2014 (UTC)

I'll miss you, Sky- you were one of my favourite TESWikians, and a great Patroller.

See ya around some time! :3

A tad late, I know. No need to say, but as I endorsed your nomination, I find myself saddened and surprised, to put it lightly. I felt I owed you this. Both as your nominator, and as a fellow Wikian.

"We must all face our demons, but wether we vanquish or accept them is ours to determine.", is a piece of advice I once gave to a friend.

My friend seems to be experiencing problems in the regions around his crotch, please help me!

Hou Sky-sama. I just wanted to tell you i'm now master of the world ! It finally hapened :) It'S also because of you and all the help you did for me, the advices, the tricks to get better at editing and all ! So, thanks alot and see you next time on the chat :) Emperor Jarjarkine

Oh sheit, don't say that, manly sweat is lubricating my eye slots! I'm happy for you and where you managed to get, dude. I'm watching Metallica at Rock in Rio right now :p —Sky Above,Voice Within · Show thy Voice! 04:35, September 20, 2015 (UTC)

Heya! Thanks for the edit, it's good to see an old member show up again. Feel free to make some more if you have the time, haha. And, if you're interested, we have a Discord these days as well as the trusty old Chat. Hope to be seeing you around some more in the future, let me know if you have any questions. :) —Atvelonis (talk) 07:40, November 29, 2017 (UTC)

Retrieved from "https://elderscrolls.fandom.com/wiki/User_talk:Sky_Above,Voice_Within?oldid=2564590"
*Disclosure: Some of the links above are affiliate links, meaning, at no additional cost to you, Fandom will earn a commission if you click through and make a purchase. Community content is available under CC-BY-SA unless otherwise noted.