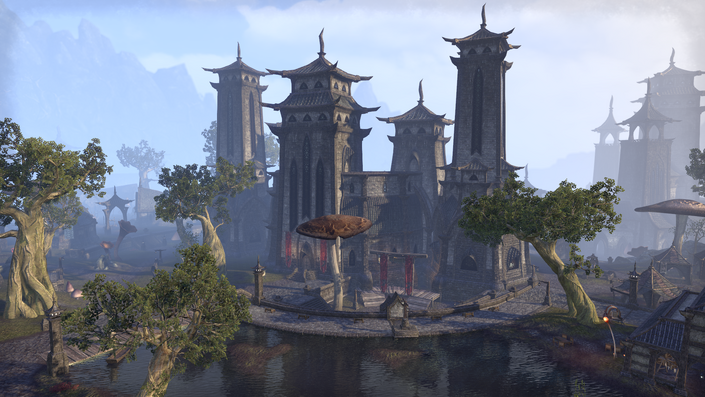 I don't think a page on Amaranth is really all that necessary. It's not all that complex of an idea, there's not much lore on it, and that lore that does talk about it is mostly C0DA related.

If I do decide to write about it on the wiki I'll probably just add it in as a section of an already existing page, such as CHIM.

Hey. I was looking through the quest page, and noticed that most of the main questline doesn't really have a page, and I'm not entirely convinced that they're named properly or need to be there in the first place... what do you think? -The Boy Who Cried Godzilla (talk) 20:01, May 16, 2016 (UTC)

Do you know why the chat's down?

So I've noticed that the ESO pages have a little ESO logo in the header section, so I began to wonder why we don't have a little Daggerfall D in ours. The Boy Who Cried Godzilla (talk) 00:36, May 30, 2016 (UTC)

I understand that, and I knew that was the ESO logo, but on the Daggerfall manual there is a D, taken from the Daggerfall logo, but upon closer investigation, the ESO pages are really the only ones with a logo, so maybe its better we don't...The Boy Who Cried Godzilla (talk) 12:51, May 31, 2016 (UTC)

Hey, you just edited a book page while I was also transscripting it at the same time. If I create an empty book page, I'm filling it imediately, so please, let us not do the same work again. Just don't touch them for a few minutes or up to an hour after creation, okay?

On the The Towers page you removed my edit, saying that the towers are a real thing and while that may be the case, the majority of the page is from Kirkbride lore. Sure, the Direnni, White-Gold and Crystal Tower are towers, but that's not what the page is about.

The Towers are a concept in The Elder Scrolls lore that focuses on the metaphysics surrounding the creation of Mundus. It draws largely from a series of texts known as Nu-Mantia Intercept written by Michael Kirkbride, former writer and designer for Bethesda Softworks. -The Towers page

As you can see, the main focus of the page is on the MK stuff, and not on the towers themselves. The majority of the page is about unconfirmed lore, for that reason the notice was rightfully placed.

Hey, your new template seems to be a little broken. User:The Crusader of Truth/Sg. The dates don't appear to be working properly. Figured I'd ask before I went and updated all of the pages it's on. —Atvelonis (talk) 14:19, June 27, 2016 (UTC)

Trouble in the Wonderful World of Arena

O/ (Don't know if that actually works, if not, have a hello instead) Crus

I went over to chat because I had a question about Arena, and asked Aspect if he could answer it, but he said he doesn't know anything about the game and directed me to you, the supposed "expert". Anyway, here it goes: Why do I die after fast-travelling to a distant city, even when completely healthy? I just wanna explore :(

Oh wait I thought of another one (insert DJ Khaled) At the beginning why can't I chose to be an Imperial?

I do expect a lot of bugs because, you know, DOS. But I'm also using an emulator. On my tablet. Do you think I'll be driven insane having to use my finger as a mouse?? Do you think I have no potential???

PS. Assuming you read this when you get home, hope you had a good camping trip. If you magically read it without internet, have a good trip.

Thanks for asking about joining! Unfortunately, as I was going to add you, I just found that guilds were deleted from the face of the earth by Atvelonis.

Sorry about that, they just weren't making any progress so we decided in the moot to scrap them. You guys can still collaborate normally though. —Atvelonis (talk) 15:47, July 26, 2016 (UTC)

I don't think I was a vampire because people were acting normally and my status thingy said healthy, so maybe it was a bug? Then again I was playing as the pre-saved character, Noiche. Good ol' Noiche. When Khajiit were humans.

I don't know what kind of camp you go to but if it involves marshmallows, roast many.

That signature just gave me some of the foulest diseases known to human kind.

I can't breath, too busy laughing.

Re: Couple of formatting questions

The only things that I noticed were incorrect were the "Related books" section (should just be "See also"), and the {{U11}} etc. templates are supposed to be used at the end of sentences, not before them. The alternative would just be to link them normally at the beginning. To answer your second question, {{Confuse}} is supposed to go above the {{Disambig}} template on Disambiguation pages. —Atvelonis (talk) 16:15, September 18, 2016 (UTC)

Re: Restoring a page

I think that was one of the templates Jarjar created a while back which were somewhat/completely broken; I don't really know anything about this one in particular though. Flight would be able to provide a better answer since he was the one who deleted it. —Atvelonis (talk) 20:51, September 24, 2016 (UTC)

Hello, I am confused now, because at first when I started to categorized all the spells, I was doing the same thing you mentioned. But one of the Patrollers back then (don't remember now) changed it like what I am doing right now. In my opinion, there is already one link in article: Main page template. --Rupuzioks (talk) 07:26, October 16, 2016 (UTC)

That actually isn't the mod color; his highlight is a little darker. It was given sort of as a permanent honorary thing because of how much he helped out with coding and templates in the wiki's early days. —Atvelonis (talk) 14:48, October 16, 2016 (UTC)

We have some automated spam/vandalism-prevention features listed on Special:AbuseFilter (you can see specifically what it prevents on Special:AbuseLog). According to the Special:AbuseLog/29143, this "Lissandraabbott" user tried to add a ton of Korean as a comment to what I assume would be a blog post. The AbuseFilter caught it, stopped the comment from going through, and blocked the user, which is a consequence of Special:AbuseFilter/16. So this is normal, don't worry about it. —Atvelonis (talk) 01:17, May 14, 2017 (UTC)

There's always lots of maintenance to be done. Special:Lonelypages is something I've been wanting to trim down for a while. The pages on there have no links pointing to them, which hurts our SEO (Search Engine Optimization). So it would be very beneficial to the wiki for you to add links to them on relevant pages. For example, an orphaned NPC article could be linked to from the article of the location where they can be found in-game. —Atvelonis (talk) 14:15, May 14, 2017 (UTC)

Yeah, pretty much all the pages on Vvardenfell Vvolumes are like that. Some of them have had book images uploaded (but not added yet), but not all of them. Still finding them in-game. :\ Timeoin•Say G'Day•View my work 19:04, June 8, 2017 (UTC)

Since Legends pages have been using {{LegendsCards}}, it would be appropriate to continue using "Card" in the {{Stub}} template. Unlike the other games, a card is just a card, regardless of what it represents. So stick with "Card," and for other Legends switches in the Stub template, for list pages or something, you could use "Gameplay." —Atvelonis (talk) 17:34, July 3, 2017 (UTC)

Yeah, I saw your edits and realised that I forgot to close the tags (whoops). When I started creating Legends pages I tended to copy the "basics" of my previous pages, and well... As a result, the same error appears on each page. Regardless, thanks for informing me, and for sorting it out! Blademaster Jauffre (talk) 23:58, July 3, 2017 (UTC)

As per my original note, I removed the "Licensing" in the template because it results in that section header being displayed twice on card image pages when the handy drop-down menu is used during upload. See here. Raylan13 (talk) 18:17, July 5, 2017 (UTC)

Thanks for the advice, I believe I did the images properly this time (I still wouldn't mind it if you checked it, just to be sure). As for my userpage, I tried what you told me, and while one list became nice and clean, the others became messy because of it, did I miss anything? Or do you know how I can still make it look neat, but for my entire page?

Yeah, you're right. I'd prefer it if concept art images just had the game-specific concept art category, rather than creature, character, etc. categories. I've made a template here.

Its nice to know i'm not writing these articles in vain, although whether anyone actually uses them as a guide or not is another matter. Oh, and thanks for your efforts to tidy them up: My edits, much like my playing style, tend to be hewed with an axe rather than finessed with a sword. JPDurzel (talk) 16:46, August 9, 2017 (UTC)

Thanks for noticing my efforts, a lot of time goes into them. I freely admit that I use the UESP Wiki as a foundation, although that is only to make sure I can complete a quest in The Elder Scrolls II: Daggerfall at all. I then play the quest multiple times (reloading the same save) to get all possible dialogue options, endings and to try all possible paths. Its a very slow method of research, but I know of many less exciting ways to look for info.

I just removed it because I've considered the Cities in Morrowind and the other similar categories should be reserved for Lore pages, which has Seyda Neen and a bunch of other Vvardenfell settlements. I understand your confusion though, and if you want to change it, then that's completely fine with me. Also, I find you very polite, and I appreciate that. I hope that clears some confusion. Hope you have a good day man.--Vincentius1 (talk) 13:44, August 22, 2017 (UTC)

That is very neat, and would definitely make for an awesome addition to the Ancient Falmer Tomes article. Nice job!

Yeah, it's been a little hectic lately with Atvelonis' unfortunate leave of absence. Reporting vandalism and tagging things for deletion definitely helps a lot, so if you can keep that up, I'd really appreciate that. Cheers,—CarloV3r (talk) 08:48, August 23, 2017 (UTC)

You dont think the festival ones are noteworthy enough? (Only asking as I know people view that page frequently). Timeoin•Say G'Day•View my work 20:24, August 26, 2017 (UTC)

Okay, well, its worth noting that its been up for a month or so, and has been clicked enough to appear prominently enough to be VERY highly ranked in searches. (Behind only fextralife). Im not saying ALL should be pages, but people are always googling the prominent ingredients. It'd be a good way to raise our ESO Profile.Timeoin•Say G'Day•View my work 20:36, August 26, 2017 (UTC)

Just the opinion of someone, who, you know, actually plays ESO. (I'd invite new editors, but I like the people id invite, and they'd hate me if I introduced them to a place this toxic to new editors) Timeoin•Say G'Day•View my work 20:40, August 26, 2017 (UTC)

Retrieved from "https://elderscrolls.fandom.com/wiki/User_talk:The_Crusader_of_Truth?oldid=2474115"
*Disclosure: Some of the links above are affiliate links, meaning, at no additional cost to you, Fandom will earn a commission if you click through and make a purchase. Community content is available under CC-BY-SA unless otherwise noted.
FandomShop Fandom IG GalaxyQuest