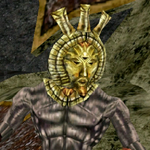 Hello The Dagonator, welcome to the Elder Scrolls Wiki! We're building a collaborative source of information for The Elder Scrolls, and we need your help!

Good work with the ESO content lately. I just want to note that categories like Online: Characters and Online: Character Image Needed are added automatically through the infobox, so you don't have to add them yourself. Only things like gender, race, location, etc. have to be added manually. —Atvelonis (talk) 16:14, June 9, 2017 (UTC)

Hi Dagonator, when you state, "This character has no unique interaction," on an article such as this, are you referring to dialogue, quests, or both? Thanks. —Atvelonis (talk) 23:44, June 12, 2017 (UTC)

When I write down such statements in such articles, I am referring to the mentioned character's complete lack of any sort of interaction that would be considered notable by Wikia standards. No related quests, no related dialogue. Simply a blank, vanilla character that you may, at most, steal from.—The Dagonator (talk) 12:32, June 18, 2017 (UTC)

I've been a tat occupied lately, so I probably didn't notice. Anyway, for an example, take your most recent creation. With the name parameter, the top of the infobox will just show the Online icon, no name at all. If you remove it, it'll take the page name as name, making "Vasamannu" appear the top of the infobox.—CarloV3r (talk) 10:20, June 21, 2017 (UTC)

Great job on all the ESO:Morrowind pages recently. They're very well formatted and a great addition to the wiki. Many thanks and keep up the good work!

Hey, good work with the dialogue. Just letting you know that you don't need to include a colon after the player statement if you're using <div class="diabox"> (like here). The colon would be used for <div class="blockquote"> after the names of characters, but in a diabox you're just recording the dialogue itself, so the colon is out of place. Thanks. —Atvelonis (talk) 15:56, August 12, 2018 (UTC)

Adding to that, if possible in the section for dialogue between the player and the NPC please name it as ==Dialogue== instead of ==Conversations==. Previously we didn't really have a set rule, but because of a recently passed moot decision we are more specific regarding that now. Thanks, and see you around! —Rozty (talk) 20:33, August 12, 2018 (UTC)

Hey Dagoth, I was reading Spencer Rye's dialogue you have been adding, and from the quest descriptions just above, it seems that it all belongs in different quests. If that's the case, is it possible to separate it according to quest as seen here? Thanks, and good work with all those additions of yours! —Rozty (talk) 17:05, August 16, 2018 (UTC)

Hello. I planned to collect the dialogue and then assign it to said quests, however if you would be willing to do it now I have no problem with that. Thank you for your concern.––The Dagonator (talk) 17:53, August 16, 2018 (UTC)

I don't actually have the Thieves Guild DLC, so I wouldn't know exactly how to assign it. I didn't know you were planning to do it in the future, that's why I asked. There is no problem, you can change it whenever is good for you. Sorry to bother with this. —Rozty (talk) 17:57, August 16, 2018 (UTC)

Hi Harald, in regards to your edit here, is the quote you replaced something that Five-Coins says? If it is, you should just list it in a ==Quotes== section below instead of removing it. Thanks. —Atvelonis (talk) 15:43, August 19, 2018 (UTC)

Greetings! A bit of advice: using some game addons (for example - "Combat Metrics") you can learn the name of each attack, and include it in the article. This way it would be easier to recognize each ability. Thanks. —TinyClayMan (talk) 17:52, September 12, 2018 (UTC)

Thank you for the advice, but unfortunately I am not a great expert on add-ons, so I have never bothered trying. If you can give me advice as to using add-ons, I would appreciate it.—The Dagonator (talk) 17:55, September 12, 2018 (UTC)

It is not that complex. To simplify the process of installing and updating the addons you need to install an addon manager. Personally, I use "Minion" (type "Minion eso" in a search engine and you will find it). After downloading it from the site start it, wait for it to detect the game and everything beyond this point should be simple (the interface is user-friendly). If you want an advice on other helpful plugins, you can visit my sandbox. TinyClayMan (talk) 21:59, September 13, 2018 (UTC)

Today I have installed, using your advice, the Minion engine and two add-ons - AUI and Combat Metrics. They have given me an entirely new perspective of the game. Thank you.—The Dagonator (talk) 12:14, September 15, 2018 (UTC)

Greetings! Image standards for 3:5 ratio mostly apply to characters with ordinary physique. If a character's body (e.g., a werewolf or a spider daedra) is not fitting in the ratio (too wide or too tall), it probably shouldn't be forced. It is not specified anywhere, but character images look better this way. Thanks. —TinyClayMan (talk) 14:50, September 20, 2018 (UTC)

Hey Dagonator, good work with the image uploads recently, as you can tell we are in serious need of those. I don't think you know this, but in case a character is lying down it's ok for the image to be uploaded in a 5:3 ratio, instead of the usual 3:5 that makes it look very awkward. In case of images such as this one, it will be perfectly fine to flip it, like this one. If possible, could you go through your uploads and change them? Thank you, and keep it up. —Rozty (talk) 19:12, September 22, 2018 (UTC)

It looks bad? I thought it added to the desperation of.. you know.. a plague. I'm not sure the originals are still in my screenshot library, but I'll try. lolThe Dagonator (talk) 19:37, September 22, 2018 (UTC)

lol, it does bring out many emotions. If you don't have the originals, downloading the images and then reuploading the flipped version also works. —Rozty (talk) 19:56, September 22, 2018 (UTC)

Re: Images of Celestial WarriorEdit

I'm sorry, but they were somewhat low quality, especially compared to the other rather good quality character images you have been uploading, and to be honest I thought they looked rather chaotic with all the activity going on in them. You are free to upload more images of that character, but if you don't mind, please try use ones that don't have so much going on. Cheers The Cat Master (talk) 17:46, October 8, 2018 (UTC)

I see the situation clearly now and I ask an apology for previous, seemingly radical response.

The Celestial Warrior fighting is impossible to screenshot any more clearly or any more centered; meaning, when he uses Sword-Singing, he can only be seen clearly doing so in a few moments because of several factors: lighting and effects that come from the very essential abilities of the eleven other players I delved the trial with (which are a requirement to beat a trial as they deal appropriate amounts of damage), lighting that comes from the setting (the sun penetrates through the cracks in the hall in daylight), and distance, but since I was the single tanker in the group I managed to get close shots of the Warrior. Believe me, there were other, much more chaotic shots that I took.

With all this in mind, I don't believe there'll be a better battle screenshot of the Warrior anytime soon, unless a focused, twelve-man group that has come all the way to specifically not attack the boss at very specific times to not hinder a screenshot. If I could have had that kind of group, I'd have much better shots...The Dagonator (talk) 15:43, October 9, 2018 (UTC)

Just a heads up, if you are still confused about the exact gold rewards depending on the player's level for quests, then you can check the table in this page. The lowest value is for level 3 and the highest for level 50. Depending on your reward you can also determine the level of difficulty from this. Atvelonis has written everything you would need to use it over there. The {{ESOGold}} template will also always give a link to the doc page when used in the articles iirc. Hope this helps. —Rozty (talk) 16:56, November 10, 2018 (UTC)

Ai, I do own The Elder Scrolls Online, even some of its expansions (Imperial City, Dark Brotherhood, and Orsinium), but I have been forced to find ESO content through different ways. The game has become too big for my computer to run properly, so I had to find another way.

But I guess I could still be somewhat of use. If not me, perhaps someone of the Guild I am part of in ESO. I played on the EU megaserver.

Retrieved from "https://elderscrolls.fandom.com/wiki/User_talk:The_Dagonator?oldid=2880651"
*Disclosure: Some of the links above are affiliate links, meaning, at no additional cost to you, Fandom will earn a commission if you click through and make a purchase. Community content is available under CC-BY-SA unless otherwise noted.