Bandits
Uttering Hills Cave is a cave in The Elder Scrolls V: Skyrim. It is located in Eastmarch, southwest of Anga's Mill and west southwest of Windhelm, nestled at the top of a snowy mountain pass with a couple of bandit tents out front.

The cave entrance leads to a natural stone tunnel that proceeds generally north. It opens into a large cavern that is open to the sky with passages leading to the left and right. Both passages lead to a second cavern that contains a cooking pot with a worked stone entry into a ruined fort/prison.

Through the wooden door is a circular room with steps leading down to the bottom, where there is an alchemy lab and an adept-locked chest (behind the wall behind the lab). Another set of stairs leads down to the west, where there is a junction that proceeds straight or turns right (north). To the north is a dining hall with bedrooms to the east and west. The room to the east has a chest with leveled loot. Back in the hallway, continuing west leads to a prison area with three cells that are opened via pull chains.

This location is originally occupied by bandits, but upon activation of the Windhelm City Influence quest for the Thieves Guild, the bandits will be permanently replaced by the Summerset Shadows for the rest of the game. 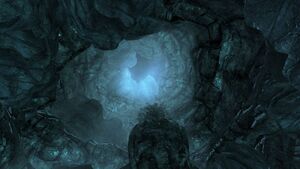