For other uses, see Vahtacen.

Vahtacen is a cave in eastern Cyrodiil, although behind its cave-like appearance lies the Vahtacen Ayleid Ruin.

It is currently being explored and examined by the Mages Guild. Skaleel and Denel are leading the excavation team.

In 1E 242, Vahtacen was the site of the Battle of Vahtacen between the Imperials and the Ayleids during the Alessian Slave Rebellions of the First Era.[1]

Raminus Polus asks the Hero to speak to Irlav Jarol about an archaeological dig site at Vahtacen, an ancient Ayleid Ruin. Speak to Irlav and he will direct the Hero there. 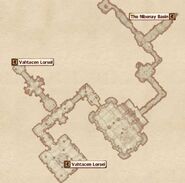 Ancient Elven Helm
Add a photo to this gallery

Retrieved from "https://elderscrolls.fandom.com/wiki/Vahtacen_(Oblivion)?oldid=2723564"
*Disclosure: Some of the links above are affiliate links, meaning, at no additional cost to you, Fandom will earn a commission if you click through and make a purchase. Community content is available under CC-BY-SA unless otherwise noted.