For other uses, see Vampire.

"With the exception of a Lich, these are perhaps the most feared of all creatures which prowl the land. Vampires are exceptionally intelligent, very strong and very fast."
―Official Arena Game Guide[src]

Vampires are undead creatures encountered in The Elder Scrolls: Arena. 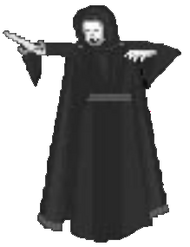 Vampires are individuals who were infected with the disease known as Vampirism. No longer living beings, Vampires are in the same condition as Zombies, Wraiths and other creatures: the undeath.

A human who carries the disease obtains immense power, including the ability to see those who are invisible to common eyes, resistance to nearly all weapons below Mithril quality, greater efficiency in magic, possibility to feed themselves with drained blood from other humans, and of course immortality to old age. Beyond these, the Official Game Guide also attributes them "exceptionally intelligent, very strong and very fast."

Vampires in The Elder Scrolls: Arena have the appearance of a normal human in black robes, only revealing his red eyes when attacking a prey. Another detail is the two teeth used to suck the blood from their victims which also only appears during their attacks.

As previously mentioned, Vampires have immunity to most weapons below the Mithril quality, with the only exception being Silver, an extremely useful weapon type for low level characters. Mages will falter in while trying to bypass Vampires using the effect invisibility, which does not fool against the creature's eyes. Another characteristic is their high amount of Health.

During combat Vampires can deal massive damage to their prey, either using Daggers at melee distance or casting the spell Fireball at long range. Vampires regenerate after being defeated with anything but magic, increasing even more their force against non-magic users. These creatures can also transmit diseases through their attacks.

Vampires stand above Medusas but below Liches in terms of power. This makes them the second strongest enemy encountered in The Elder Scrolls: Arena.

The Vampire appears in the following locations:

Retrieved from "https://elderscrolls.fandom.com/wiki/Vampire_(Arena)?oldid=2984395"
*Disclosure: Some of the links above are affiliate links, meaning, at no additional cost to you, Fandom will earn a commission if you click through and make a purchase. Community content is available under CC-BY-SA unless otherwise noted.