Advanced Armors
Vampire Royal Armor is a piece of light armor that appears in The Elder Scrolls V: Dawnguard.

This piece of armor is available in the following locations:

Vampire Royal Armor can be upgraded at a workbench with leather and the Arcane Blacksmith perk. It also benefits from the Advanced Armors perk, which doubles the improvement.

Wearing this piece of armor grants the following skill bonuses: 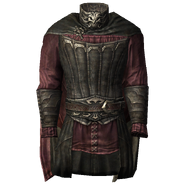 Female variant as it appears in the inventory