Vanus Galerion, born as Trechtus, was an Altmer mage of the Psijic Order during the Second Era. He founded the Mages Guild in response to the growing influence of the necromancer Mannimarco on the continent of Tamriel and the failure of his former order to act against the threat. He and his followers eventually defeated Mannimarco's necromancer army. Galerion died in this last great battle. He is sometimes referred to as "The Great Mage."[source?]

During the early bloody years of the Second Era, Vanus Galerion was born under the name Trechtus, a servant on the estate of Lord Gyrnasse of Sollicich-on-Ker, a minor nobleman.[1]

His father and mother were common laborers, but his father had secretly taught himself and then his son to read, against the law of Lord Gyrnasse. The lord had been advised that literate servants were an abomination of nature and dangerous to themselves and their lords, and had closed all bookstalls in Sollicich-on-Ker. All booksellers, poets, and teachers were forbidden, except those in Gyrnasse's keep. Nevertheless, a small scale smuggling operation kept a number of books and scrolls in circulation right under Gyrnasse's nose. However, when Trechtus was eight, the smugglers were found and imprisoned. It was said that Trechtus' mother, an ignorant and religious woman, fearful of her husband, had betrayed the smugglers, but there were other rumors as well. The trial of the smugglers was a farce, and the punishment came quickly. The body of Trechtus' father was kept hanging for weeks during the hottest summer Sollicich-on-Ker had seen in centuries.[1]

Trechtus fled from Lord Gyrnasse's estate three months later. He made it as far as Alinor, half-way across the Summerset Isles. A band of troubadours found him nearly dead, curled up in a ditch by the side of the road, nursed him to health, and employed him as an errand boy in return for food and shelter. One of the troubadours, a soothsayer named Heliand, began testing Trechtus' mind and found the boy, though shy, to be preternaturally intelligent and sophisticated given his circumstances. Heliand recognized in the boy a commonality, for Heliand had been trained on the Isle of Artaeum as a mystic.[1]

When the troupe was performing in the village of Potansa on the far eastern end of Summerset, Heliand took Trechtus, then a boy of eleven, to the Isle of Artaeum. Iachesis, the Magister of the Isle, recognized potential in Trechtus and took him on as pupil, giving him the name of Vanus Galerion. Vanus trained his mind, as well as his body, on the Isle of Artaeum.[1]

The two best apprentices of Artaeum were Vanus Galerion and Mannimarco. While Galerion used his talents wisely and honorably in honor of the memory of his father, Mannimarco began an objective study of the dark arts. He became fascinated by the secrets of the necromancers, and was seduced into the practice of entrapping and enslaving souls. When Mannimarco experimented with a foul spell, he drew the attention of Galerion. Vanus confronted his fellow student beneath the Ceporah Tower, saying, "Your wicked mysticism is no way to wield your power. Your studies must cease, because you only bring horror to the spirit world." Corrupted by his experiences, Mannimarco laughed, as he had come to hate the ways of life and peace. He returned to his studies and his experiments of death and decay.

Then the Psijic Order sent Mannimarco, now a full necromancer, to the mainland to run an errand. In Tamriel, Mannimarco began to develop his own plans and started collecting corpses and souls, freed from the laws of the Order. Galerion told his masters they had made a mistake, stating, "You have found a wolf, and sent the beast to flocks of sheep." All Tamriel was now threatened, since Mannimarco would be able to gather followers in Tamriel's mainland. "A terror on Tamriel has set," Galerion said.

The masters ignored Galerion's warnings and took no action against the growing threat. "Speak no more of him," the sage Cloaks of Gray said. They eventually forgot completely about their mistake, though Galerion did not forget.

Vanus Galerion saw that the Psijics had become set in their ways and would not change. For things to change, a new order had to be created. The mage began collecting magic-users from around the Summerset Isles, from all social classes. Galerion operated out of the urban center of Firsthold, employing an attitude that magical experiments should be conducted only in unpopulated areas. Even more shocking, he proposed to make magical items, potions, and even spells available to any member of the general public who could afford to pay. No longer was magic to be limited only to the aristocracy and the intellectuals. It was because of his background, of "want and injustice, that he received his philosophy of sharing knowledge."[1]

Galerion was brought before his former master Iachesis and the King of Firsthold, Rilis XII, to justify his intentions for the fraternity he was forming. The fact that Galerion's speech to Rilis and Iachesis was not recorded for posterity is doubtless a tragedy, though it does afford opportunity for historians to amuse one another with speculation about the lies and persuasions Galerion might have used to found the organization. However, the charter was approved.

Almost immediately after the Guild was formed, the question of security came up. The Isle of Artaeum did not require force of arms to shield it from invaders, because the Psijic Order had the power to prevent anyone from landing by making the Isle and all its inhabitants become insubstantial. The new Mages Guild had to hire guards. Galerion soon discovered what the Tamrielic nobility had known for thousands of years: Money alone does not buy loyalty. So in order to protect his order, or "Guild," Vanus created another order to be their guardians. The knights of the Order of the Lamp followed their own local Palatinus, or leader, who was under direct orders from the Arch-Mage. The knights were given appropriate rights to certain services at the Mages Guild and one's rank within the Order approximated one's rank within the Guild, in terms of rights and privileges. Only those who had already demonstrated fighting skills and were on good terms with the Mages Guild were accepted as guardians.

The Mages Guild grew branches all over Summerset Isle and gradually the mainland of Tamriel. There were numerous records of superstitious or sensibly fearful rulers forbidding the Guild in their domains, but their heirs or heirs' heirs eventually recognized the wisdom of allowing the Guild free rein. The Mages Guild has become a powerful force in Tamriel. There have been only a few rare incidents of the Mages Guild actually becoming involved in local political struggles. On these occasions, the Guild's participation had been the ultimate decider in the conflict. One need not be a member of the Mages Guild to know that this carefully contrived hierarchy was often nothing more than a chimera. As Vanus Galerion himself said bitterly, leaving Tamriel to travel to other lands, "The Guild has become nothing more than an intricate morass of political infighting.".

The King of Worms[edit | edit source]

Meanwhile, during the rise of the Mages Guild and its descent into decadence, Mannimarco established a base of operations and stretched his dark grip through Tamriel's deserts, forests, towns, mountains, and seas. Mannimarco had dabbled deeper and deeper into secrets long forgotten until the rot of necromancy sunk to his very core. He gathered many followers and servants, and corrupted wizards and witches from all over Tamriel came to him with cursed artifacts and gifts. The Order of the Black Worm was born.

Mages who joined him brought him tomes, enchanted weapons and armor, blood-tainted herbs and oils, Akaviri poison, bonemeal of dead saints, human skin, toadstools, roots and other alchemical ingredients. Mannimarco absorbed the dark energy out of these objects, and as a result life-energy was sucked out of him. His body became that of a corpse and his blood poison and acid. His power and the duration of his life grew along with his arsenal.

Vanus Galerion had never forgotten his nemesis Mannimarco. He had always searched for clues of the necromancer's presence but did not find him. When Mannimarco resurfaced, Galerion amassed an army of his most loyal mages and Lampknights and traveled north to a cursed mountain path to settle his business with Mannimarco. "Before my last breath, I must face the tyranny of worms, and kill the undeath at last."

Galerion and his army were met by an equally powerful army of necromancers on the mountain, and both sides were ready to do battle. Galerion cried to Mannimarco, "Surrender, Worm King. Hand over your artifacts and their power to me, and you shall live until dead sees fit." Mannimarco answered with a hollow laugh, "You die first." The two armies then clashed, lightning and frost cascading around them. The necromancers summoned various undead creatures to their sides which were slain by streams of light forged by the battlemages. Galerion discovered before the end of the battle that Mannimarco was no longer alive, but had turned himself into the first lich ever and thus gained immortality. Galerion's army won the battle and managed to crush the remaining necromancers. Mannimarco disappeared from the scene and was not seen again for ages.

Unfortunately, Galerion died in the great battle along with a thousand other battlemages and necromancers, though his legacy lived on in Tamriel's history and literature. The practice of necromancy would live on.

Help Vanus Galerion set up an All-Banners meeting in a neutral location.

Prevent the Daedra from using Galerion's essence to power the Planemeld.

Through a Veil Darkly[edit | edit source]

Vanus Galerion summons you when receives a distressing message from Oracle Marieve. 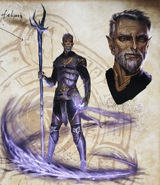 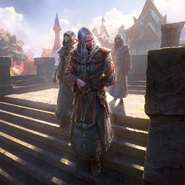 Vanus Galerion in Legends
Add a photo to this gallery

Retrieved from "https://elderscrolls.fandom.com/wiki/Vanus_Galerion?oldid=3084085"
*Disclosure: Some of the links above are affiliate links, meaning, at no additional cost to you, Fandom will earn a commission if you click through and make a purchase. Community content is available under CC-BY-SA unless otherwise noted.