Northeast of the Imperial Prison Sewer

Bandits
Undead
Necromancers
Vilverin is an Ayleid Ruin, located a short distance northeast from the Imperial Prison Sewer. Its crumbling stone walls can be seen upon exiting the sewer. Ancillary ruins start at the Red Ring Road, and the area nearby is patrolled by Imperial Legion soldiers.

The ruins are spread out over some area and the area above ground has some notable loot. There is a chest near the entrance, usually filled with gold, and an Ayleid Well above it. A small camp occupied by two bandits is in the ruins, and has a bed, a few scattered barrels, and the book Immortal Blood. A short ways north is a pier with two chests.

Despite being one of the first accessible dungeons in the The Elder Scrolls IV: Oblivion, Vilverin is remarkably large and ornate. There are many locked doors that will stump the skills and abilities of non-Thief characters (those with a low Security skill), but unlike later dungeons, all the primary areas can still be accessed, thanks to numerous pressure-plates that open up secret doors.

Plants are fairly sparse, with a couple of foxglove, monkshood, Bergamot, and a garlic cluster being the sum total. Also, typical with most Ayleid Ruins, there are numerous Welkynd Stones, along with a Varla Stone in Wendesel and an Ayleid Statue in Sel Sancremathi.

The first level is inhabited by bandits, while the second, third and fourth levels are inhabited by undead. There is a Guide to the Imperial City on a table in the first zone, with a Dirty Scroll next to it.

The final room of Vilverin, Sel Sacremathi, is the abode of Jalbert, a Necromancer who relies upon the crypts and bandits as resources for his experiments. Among the treasure in this room is one guaranteed random magical item. A Manual of Spellcraft, Fundaments of Alchemy, and one Undelivered Letter are on the stone altar, with a Fine Iron Longsword on another, lying next to a skeleton.

Lord Umbacano of the Umbacano Manor in the Talos Plaza District is a collector of rare Ayleid antiquities. 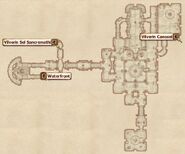 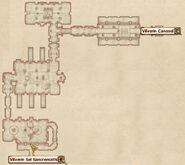