For other uses, see Telvanni Canton.

Telvanni Canton is a location in Vivec City in The Elder Scrolls III: Morrowind.

The Telvanni Canton is found in Vivec City. It is the Great House Telvanni's hold. It houses many shops, a large number of living areas, a temple, an Inn and a tower. It has four levels, The highest is the Plaza where the Tower can be found. Under, lies the Waistworks which serves as a market, where most shops can be found, as well as the Temple and the Inn. Below, the Canalworks contains the living quarters of a group of slaves, and their owner. A Laboratory guarded by Dwemer Animunculi can, also, be found there. The lowest level is the Underworks which serves as sewers to the canton.

The Plaza contains two houses, a storage and a tower. It is patrolled by Ordinators. Avoni Dren, Deldasa Thirandus, Landa and Tendren Hlervu can be found there.

The Underworks serves as sewers for the canton. 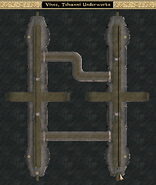 The canton's plaque
Add a photo to this gallery

Retrieved from "https://elderscrolls.fandom.com/wiki/Vivec,_Telvanni_Canton?oldid=2767351"
*Disclosure: Some of the links above are affiliate links, meaning, at no additional cost to you, Fandom will earn a commission if you click through and make a purchase. Community content is available under CC-BY-SA unless otherwise noted.