The Temple Canton is a location in The Elder Scrolls III: Morrowind.

The Shrine of Daring[edit | edit source]

On the terrace of the Temple Canton, in the south-west corner, the Shrine of Daring can be found, which is also called "Shrine to stop the moon," that commemorates Vivec's feat, when he saved the people of the city from the devastation of a falling satellite.

If a Rising Force Potion is donated to the Shrine, it will confer the blessing of Levitation, 100 points in magnitude, lasting for 48 minutes.

Above the Temple, one of the most striking features of Vivec City can be seen, The Ministry of Truth,[1] also known as Baar Dau.[2] It is a large floating satellite hanging above the Temple, suspended only by the power of the god Vivec,[1] and later the Ingenium.[3] The Ministry of Truth is used as an inescapable prison, where prisoners that are considered dangerous by the Tribunal Temple are kept.[1]

The Hall of Justice is the headquarters of the four orders of the Ordinators.

The Library of Vivec and offices of high-ranking Temple members can be found at the Hall of Wisdom.

The High Fane, Vvardenfell's biggest temple, is a center of attraction for pilgrims. 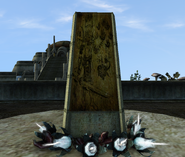 Shrine to stop the moon

The Temple layout
Add a photo to this gallery

Retrieved from "https://elderscrolls.fandom.com/wiki/Vivec,_Temple_Canton?oldid=3121692"
*Disclosure: Some of the links above are affiliate links, meaning, at no additional cost to you, Fandom will earn a commission if you click through and make a purchase. Community content is available under CC-BY-SA unless otherwise noted.