For other uses, see Vivec.

Vivec is a creature card in The Elder Scrolls: Legends that is a part of the Houses of Morrowind expansion.

Vivec is best used as a last resort card while you are low on health and about to lose the game. It is best to protect him with a Guard to preserve him as long as possible, as your opponent will most likely try to take him out. Vivec is also useful if played normally, when one is not on the brink of defeat, but try and avoid using the card for this reason because it may be wasted. 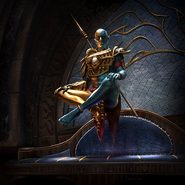 Retrieved from "https://elderscrolls.fandom.com/wiki/Vivec_(Card)?oldid=2966681"
Community content is available under CC-BY-SA unless otherwise noted.