Lord Vivec, also known as Vehk, is one of the three members of the Tribunal, the mortal gods who rule Morrowind, and the Guardian of Vvardenfell. He can be found in his palace in Vivec City. The questline of The Elder Scrolls Online: Morrowind involves the Vestige helping Vivec stop Baar Dau from falling, and discovering the cause of his mysterious illness to help restore his strength.[1][2][3]

"Return swiftly, Morag Tong, and bring any allies you meet. Morrowind has need of you all."
―Vivec[4]

Vivec is heavily involved in the main questline, which includes stopping the meteor Baar Dau and helping him regain his lost powers.[2]

Once Canon Llevule is assisted at Andrano Ancestral Tomb, he sends the Vestige to speak to Vivec. Upon entering Vivec's Palace, the following conversation will occur:

Canon Llevule: "This is the person who helped me at the tomb, my lord."
Archcanon Tarvus: "Lord Vivec, we don't need the help of this... Outlander."
Vivec: "Oh hush, Archcanon Tarvus. Outlanders have their usefulness and this one intrigues me."
Tarvus: "As you say, I'll be in my office if you need me."
Vivec: "Step forward, friend of Llevule, and let us speak."

Upon speaking to Vivec, he says he will need the Vestige's assistance to perform a divination ritual, and speak to Archcanon Tarvus about it. Upon obtaining the Blessing Stone and going to the palace, Tarvus and Vivec will initiate the ritual, only for it to end on an abrupt note. After speaking to Vivec, he will reveal that his divine essence is draining away, and he needs their assistance to discover the cause.

Vivec will request that the Vestige speak to Archcanon Tarvus about leads to investigate regarding the loss of his power.

Later, after speaking to the Archcanon, Vivec can be found inside his palace. He will be sitting down in a weakened state, leaning against his spear, and speaks to Llevule:

Canon Llevule: "My lord! Please! Let me send for aid. Perhaps one of the healers can help you."
Vivec: ""Pain is best tolerated in private," as I have written in the Thirty-Seventh Ballad."
Llevule: "There must be something I can do."
Vivec: "You can call the Archcanon. He should hear the news our friend brings us."

The Vestige is to speak with him about the recent events that have transpired. Once he is informed about Chodala's actions, he asks them to speak with Archcanon Tarvus. 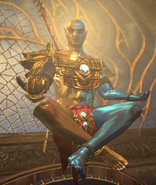 Vivec as seen from behind[5]

Vivec in his palace

Barilzar kneeling to Vivec in the Temple Canton

Concept art of Vivec and his artifacts

Retrieved from "https://elderscrolls.fandom.com/wiki/Vivec_(Online)?oldid=3128099"
*Disclosure: Some of the links above are affiliate links, meaning, at no additional cost to you, Fandom will earn a commission if you click through and make a purchase. Community content is available under CC-BY-SA unless otherwise noted.