For other uses, see Vivec City.

Vivec City, also known as Vivec, is a city in The Elder Scrolls III: Morrowind.

The large city is the capital of the island of Vvardenfell, it is the seat of Dunmer religion on Vvardenfell. It is named after one of the Tribunal gods, Vivec. The city is made of nine cantons. It lies on the southern coast of Vvardenfell, by the Inner Sea. The whole city is guarded by Ordinators. The nine cantons that form the city are Vivec, Foreign Quarter, Redoran Canton, Arena Canton, Hlaalu Canton, Temple Canton, Telvanni Canton, St. Delyn Canton, St. Olms Canton and the Palace of Vivec. The separate cantons are joined by walkways. Each canton is a single sprawling structure, containing many inhabitants, traders, temples, Inns and much more. There are Gondoliers offering, for a small fee, a ride to and from the different cantons.

A moonlet can be seen suspended above the Temple; it is called the Ministry of Truth.

Just outside the city, to the north, there is a Silt Strider travel port. To the west, on the other side of the creek, the town of Ebonheart can be found.

The city is also home to the God, Vivec, who lives in the Palace of Vivec during the events of The Elder Scrolls III: Morrowind.

Following the fall of the Tribunal, Vivec was not considered a god by his people anymore.[1] The Ministry of Truth, a floating meteor that was kept suspended in the air by Vivec himself, completed its fall and destroyed Vivec City, creating a large, flooded crater.[2] Saldus Llervu, who witnessed the event on the mainland, said to have seen the cantons fall apart before being knocked off his feet by the impact's power.[3]

During the Argonian Invasion, the An-Xileel performed a strange ritual on the crater itself, turning it into what they called the "Scathing Bay." The waters in the newly formed crater are constantly boiling. When Umbriel flew over it in 4E 40, legions of dead were said to have rose out of the boiling waters.[2]

The city itself is an artificial archipelago made of a large palace and eight large, multileveled buildings called cantons. Most cantons are divided into four levels. From the bottom up: the Underworks, the Canalworks, the Waistworks, and Plaza. In the foreign quarter, the Waistworks is divided into Upper and Lower sections. There is also the moonlet of Bar Dau,[4] known as the Ministry of Truth.

The Underworks are the lowest level of each canton, and provide a sewer system.

The Canalworks are used for storage, and there are religious areas, traders, shrines, temples, and tombs.

The Waistworks houses residential quarters, pubs, clubs, traders, along with many denizens populating the Waistworks. Stalls can be found, as well as corridors going through the area, often ending or branching in shops or pubs. St. Olms and St. Delyn have living quarters accessible from outside.

The top level of the canton is called the plaza. The plaza contains houses, temples, treasuries, Estates, as well as shops and cornerclubs.

St. Olms and St. Delyn cantons are home to the guilds, the potters and the glassworkers reside in St. Delyn. In St. Olms, the brewers and fishmongers guilds can be found.

The Arena Canton is best known for containing an arena and the headquarters of the Morag Tong. The main section of the building is an arena with its fighting pit and hundreds of seats for spectators, it is used for various fighting matches, honorable duels. Feuds, and matters of succession are settled here.[5] The Nerevarine has to fight in a duel in the arena during the main quest. The Waistworks houses the fighter living and training areas, and shop stalls.

The Temple of Vivec serves as the seat of the Dunmer religion on the island of Vvardenfell.

In the southernmost section of Vivec city, the temple spans two unique cantons. The main temple contains the Hall of Wisdom, the Hall of Justice and the High Fane.

The Hall of Wisdom is home to the Temple Library, one of the largest libraries in Vvardenfell. Many rare books are stored here.

Next to the Hall of Wisdom lies the Hall of Justice, which serves as headquarters and barracks to the Ordinators.

Above them, the High Fane can be found. It serves as headquarters for the Tribunal Temple, and houses many of its members, of which the Archcanon.

The Ministry of Truth[]

Above the Temple, one of the most striking features of Vivec City can be seen, The Ministry of Truth,[6] also known as Baar Dau,[4] it is a large floating satellite hanging above the Temple, suspended only by the power of the god Vivec,[6] and later the Ingenium.[2] The Ministry of Truth is used as an inescapable prison where prisoners that are dangerous to the Tribunal Temple are kept.[6] 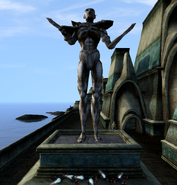