watch 00:50
'The Elder Scrolls Online: Morrowind' – Naryu’s Guide to Vivec City
Do you like this video?

For other uses, see Vivec City.
For the demi-god, see Vivec (Online).

Vivec City, sometimes shortened to Vivec, is a settlement in the Ascadian Isles of Vvardenfell that appears in The Elder Scrolls Online: Morrowind. It is ruled over by and named after the Tribunal god-king and guardian of Vvardenfell, Vivec. The city is currently under construction, and the meteor Baar Dau is suspended from destroying it by Vivec. The Caravaner, Helseth Sadalvel, travels to Suran, Balmora, Gnisis, and Tel Mora from this location.

Every canton from The Elder Scrolls III: Morrowind (except for the foreign quarter) is present, though only some have been completed. Baar Dau has not yet been carved into the Ministry of Truth.

A quest can be obtained from a handbill called Adventurers Wanted! which is scattered around the city.

Go back to Ald'ruhn, and talk to Seryn.

Delivery a delivery from Vivec City to Sadrith Mora.

A Friend In Need[edit | edit source]

Outside Canton of St. Delyn the Wise[edit | edit source]

Outside Canton of St. Olms the Just[edit | edit source]

Vivec City as seen from eastern part of the Ascadian Isles. Some cantons can be seen under construction.

A busy street on the west side of the Temple Canton

The Cantons of St. Delyn (left) and Olms (right)

The Palace of Vivec with the Temple Canton and Temple Wayshrine 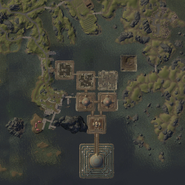 The Delyn (left), Olms (back right), and Temple (front right) Cantons from Vivec's Palace, with Red Mountain in the background

A bridge between two cantons

Retrieved from "https://elderscrolls.fandom.com/wiki/Vivec_City_(Online)?oldid=3128100"
*Disclosure: Some of the links above are affiliate links, meaning, at no additional cost to you, Fandom will earn a commission if you click through and make a purchase. Community content is available under CC-BY-SA unless otherwise noted.