Goblin Caves
Voa was the archmage of the Stros M'Kai Mages Guild prior to the events of The Elder Scrolls Adventures: Redguard.

During the Battle of Hunding Bay, the Dunmer assassin Dram, under orders from Lord Amiel Richton, stuck a fatal blow to the young Crown Prince A'Tor with a fast-acting poisoned shaft. In desperation, Voa binded the prince's soul to a gem and created a magical barrier around his body. Soon after, the dragon Nafalilargus rained fire down upon the prince's flagship, killing all on board.[1]

Voa's sacrifice was not in vain, for the soul gem somehow ended up in the possession of the Restless League, a vigilante group of privateers loyal to the Crowns rule.[2] However, without his ring, the stasis field which preserved A'Tor's body could not be permeated to restore his mortal form. His own final resting place lied, inexplicably, in the secret goblin caves beneath Port Hunding's city park. Cyrus would eventually best the goblins and ogres within and retrieve the enchanted ring from the former archmage's desiccated remains.[3] 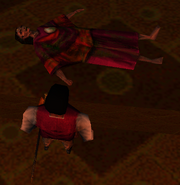 Voa's body.
Add a photo to this gallery

Retrieved from "https://elderscrolls.fandom.com/wiki/Voa?oldid=3079117"
*Disclosure: Some of the links above are affiliate links, meaning, at no additional cost to you, Fandom will earn a commission if you click through and make a purchase. Community content is available under CC-BY-SA unless otherwise noted.