The undercroft was originally an old escape tunnel out of the castle. It contains the old water cistern in which Serana comments it had an unpleasant odor back then. It is also used as a dump for disposing unwanted human corpses through the trapdoor from the thrall cells above. When entering the Undercroft, there are a few coins on the ground alongside clam meat. There are numerous death hounds and an encounter with a Feral Vampire. A giant frostbite spider guards the lever used to lower the drawbridge to the courtyard. The undercroft leads to the Volkihar Ruins.

When the courtyard is first entered, it is in a neglected state with a few old graves and headstones. According to Serana, Harkon hated the courtyard as it was "too peaceful." Scattered around are various fungi and deathbell plants.

There are three parts that need to be collected to operate the giant moondial: the Crescent Moon Crest, the Full Moon Crest, and the Half Moon Crest. After completion of the Kindred Judgment on the side of the vampires, the option to clear the pathway to the courtyard becomes available. In addition, Valerica can be convinced to return to the castle, where she will replant many of the plants in the courtyard.

A small tower with a few skeletons inside. Single coins and jewels are scattered around the floor.

Another small tower with a few Skeletons inside, and occasionally a gargoyle. This tower also features a crushed humanoid skeleton, with a deer head, carrying a silver necklace and some gold bars. There are two chests located here, one next to the gargoyle and the other above the stairs.

The ruins are nearly as big as the keep itself. It contains dining room tables, bedrooms, and a spacious chapel with a broken statue of Mara. The size of the ruins indicate that the castle had larger numbers but they fell short over a period of time, leaving the ruins abandoned. There are plenty of enemies in this location, mostly skeletons, death hounds, and Gargoyle Brutes. They can be ruthless and will hunt in packs; sometimes even pretending to be stone statues. A Vampire Royal Armor and a pair of Vampire Boots are on a shelf next to a bookcase near the end of the dungeon.

This location contains the Soul Cairn portal as well as a plethora of ingredients and other useful items. The room itself is very large, adorning two floors. The first floor contains an area with many bookshelves, almost as a small library.

One notable book found next to the table of bones is Valerica's Journal. Near this alcove, is an alchemy lab. Finely ground bone meal, normal bone meal, and a single dragon bone are found by the lab. There is also a black soul gem hidden among the soul gem fragments. Soul gem shards can be found on top of a dresser on the east side of the study.

There is a door leading to the Castle Volkihar Balcony, which can be used to fast travel to and from the study. 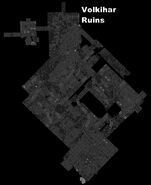 Volkihar Ruins
Add a photo to this gallery

Retrieved from "https://elderscrolls.fandom.com/wiki/Volkihar_Dungeons?oldid=3008203"
*Disclosure: Some of the links above are affiliate links, meaning, at no additional cost to you, Fandom will earn a commission if you click through and make a purchase. Community content is available under CC-BY-SA unless otherwise noted.