"Voriplasm. Big word. It'll strip you to the bone by the second syllable."
―Shehs[src]

Voriplasm is a creature native to the innermost swamps of the Imperial province of Black Marsh,[1] the homeland of the Argonians.[2]

Voriplasm is a puddle of green slime that can move quickly across the water of Black Marsh. It devours its prey quickly, ejecting its bones as it moves along. Though mostly located in the water, voriplasm can also travel on land. They can also command the skeletons of the prey they come across.[1][3] 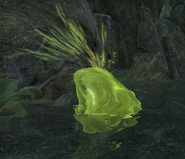 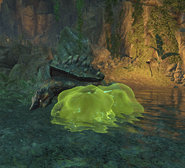 Voriplasms feeding on Haj Mota
Add a photo to this gallery

Retrieved from "https://elderscrolls.fandom.com/wiki/Voriplasm?oldid=3077585"
*Disclosure: Some of the links above are affiliate links, meaning, at no additional cost to you, Fandom will earn a commission if you click through and make a purchase. Community content is available under CC-BY-SA unless otherwise noted.