Vul–Thur–Yol, "Dark-Overlord-Fire") is a hidden Ancient Dragon, summoned in the underground Dwemer capital city of Blackreach. He is a metallic bronze color with a black and beige pattern on his wings and tail.

To find Vulthuryol, access the center building area in Blackreach where there is a large yellow orb above the Blackreach Debate Hall and the Hall of Rumination. The closest exit from Blackreach to this orb is the Great Lift at Mzinchaleft.

The orb is visible upon entry. A number of Falmer and Falmer Servants will be hostile and one must thus fight their way through them. After doing so, use Unrelenting Force on the orb. Doing so will make the orb ring and echo throughout the caverns. This will summon Vulthuryol.

If the Dragonborn summons Vulthuryol and does not engage in combat with him, he will eventually take up a stationary position on the ground outside of the south entrance to the orb complex. If the Dragonborn is positioned on the ramps leading from the top exit of the Hall of Rumination or another high vantage point, Vulthuryol can be range attacked and he does not rise from the ground. Vulthuryol can only be summoned once. 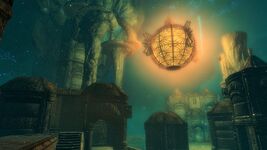 If not aggressively attacked, Vulthuryol will fly around Blackreach and attack many other enemies in the area, such as this giant.
Add a photo to this gallery

Retrieved from "https://elderscrolls.fandom.com/wiki/Vulthuryol?oldid=3093087"
*Disclosure: Some of the links above are affiliate links, meaning, at no additional cost to you, Fandom will earn a commission if you click through and make a purchase. Community content is available under CC-BY-SA unless otherwise noted.