Tribunal Temple
House Hlaalu
House Redoran
House Telvanni
Vvardenfell, also known as the Black Isle,[1] is a very large island inside the crescent-shaped lands of the province of Morrowind, located in the Inner Sea in the north-eastern part of Tamriel. It has been inhabited by the Aldmer, Dwemer, Chimer, and most prominently the Dunmer throughout its course of history. Vvardenfell is the primary setting of The Elder Scrolls III: Morrowind and The Elder Scrolls Online: Morrowind.

One of the most outstanding landmarks of the island is Red Mountain, a volcano located at its heart that continuously shoots ash into the skies. This has led to the large stretches of barren and inhospitable Ashlands, where lava flows and ashstorms are common, as can be witnessed in Molag Amur. These storms were also a source of the Blight disease, until the events of Morrowind.

In the Third Era, in all directions around Red Mountain Region were a variety of ecosystems, home to a large number of unique plants and creatures, as well as numerous settlements. The political climate was just as varied, with the Great Houses, the Empire, and the Tribunal Temple, among others, all coexisting and competing for influence. Major cities of Vvardenfell included Vivec City, former home of the Temple of Vivec and the Ministry of Truth, Balmora, seat of House Hlaalu, Ald'ruhn, seat of House Redoran and Sadrith Mora, seat of House Telvanni. However, by the early Fourth Era, much of Vvardenfell had been reduced to ash wastes.

The island of Vvardenfell is divided into nine separate regions, each with its own distinct climate, geography and ecology.

The Ascadian Isles are the fertile, green lowlands on the south-southwestern corner of Vvardenfell. Settlements include Vivec, Ebonheart and Pelagiad. The large Daedric ruins of Ald Sotha lie to the north of Vivec. Most of Vvardenfell's farms and plantations are in this region. These typically include Netch herding and agriculture. Plants that commonly grow in this region include heather, willow flowers, stoneflowers, gold kanet flowers, black anther plants, comberry, corkbulbs, saltrice, ash yams and marshmerrow. Slavery is common in this area, especially on the plantations.

The Ashlands are the dry and inhospitable areas surrounding Red Mountain to the north and west. Various Dunmer tribes inhabit the region, and the Redoran seat of Ald'ruhn is near the western edge. The Ashlands are inhospitable to most life, but some creatures have managed to adapt to the harsh terrain and climate. These include mainly Guar, Nix hounds, Cliff racers, and Alit. Some plants, like the Trama Root, manage to flourish in this desolate area. Nomads known as Ashlanders also call this region home. Hazardous ashstorms are frequent due to Red Mountain's volcanic activity. Blight is common in this region.

Azura's Coast is the long, rugged and mostly uninhabited coastline and islands of Vvardenfell's east and southeast. It is a wet and rocky area devoid of trees, only low-lying and hardy vegetation is able to exist here. The area, historically uninhabited, has seen a drastic increase in population since the opening of Vvardenfell. Most of Azura's Coast fell within the jurisdiction of House Telvanni, and they have established several settlements including Tel Branora to the south; Tel Aruhn, Tel Fyr, and the house seat of Sadrith Mora, within Zafirbel Bay; and Tel Mora, near the junction of Azura's Coast and the greater Sheogorad archipelago.

The Bitter Coast is the humid southwestern coast of Vvardenfell, so-named because of the area's salt marshes and swamps. It is also known as the Smuggler's Coast, due to the rampant smuggling that goes on in this area. Seyda Neen, Hla Oad, and Gnaar Mok are the only settlements in the region. The area is lush with tall trees, rich plant life, and rare fungus. Plants and fungi that grow here include violet coprinus, luminous russula, bungler's bane, hypa facia, slough fern, and occasionally hackle-lo. There are several shipwrecks in the area, a result of the coast's infamous fog and bad weather. Numerous small islands dot the coast as well as several grottos.

The Grazelands are plains that cover the majority of the northeastern coast of the island and are so named because of the Ashlander herds that graze there. It is largely uninhabited, except for the settlement in Vos village, as well as the wizard tower of Tel Vos. The Ahemmusa and Zainab Ashlander tribes also have settlements in the region.

The region located between the Ashlands and Azura's Coast is Molag Amur. It is a desolate expanse of lava flows, ravines, and fields of ash. Travel is difficult, and ashstorms frequently strike the area. Parts of the region are considered impassable, even by the ashlanders. The stronghold of Molag Mar, Erabenimsun camp, and the pilgrimage sites at Mount Assarnibibi and Mount Kand are the only inhabited sites. Molag Amur consists almost entirely of a confusing maze of foyadas. The dangers of Molag Amur are considerable; it is one of the areas most likely to be stricken by ash storms, and is a prime habitat of such creatures as cliff racers, shalks, and other hardy creatures such as alit. Due to this, and its winding labyrinthine passages, travellers can easily get lost or come under attack.

The western highlands stretching from the Sea of Ghosts to the city of Balmora is called The West Gash. The Hlaalu district seat of Balmora is here, as is the Imperial town of Caldera, the mining village of Gnisis, and the fishing villages of Ald Velothi and Khuul. Vegetation in the region is sparse, but hardy. Common plants are kreshweed, roobrush and chokeweed.

The large island of Sheogorad is on the northern tip of Vvardenfell, and due to its rugged terrain and hostile creatures, it is largely uninhabited, except for the small villages of Dagon Fel and Ald Redaynia. The population is mostly composed of Nords, who claim to have settled here even before the Chimers claimed Morrowind. Numerous ruins dot the landscape, and there are several daedric and Dwemer ruins in the area. The region is named after Sheogorath, the Daedric Prince of Madness.

The Red Mountain is the central, defining feature of Vvardenfell. It is a giant volcano, steep and rugged, from which ash storms continually issue. Surrounding the mountain is the magical Ghostfence, which fences in the many demon of the region, and filters out the disease-laden "blight" which issues from the crater. The only official entrance is at the fortified outpost of Ghostgate, in which pilgrims, as well as the Buoyant Armigers, reside. In addition, an ebony mine burrows beneath the eastern portion of the Ghostfence and opens out onto the slopes of Red Mountain. Numerous Dwemer ruins dot its slopes, and Dagoth Ur resides inside a facility deep inside the mountain, and the majority of the inhabitants in the region are servants of Dagoth Ur. Other than that, it is uninhabited, though you can find the occasional mine on the Mountain's slopes, for it is rich in natural resources such as ebony ore and raw glass. Plants are extremely scarce and most of the trees are dead. Only trama shrubs, scathecraw and fire ferns have a chance of surviving here. Adventurers rarely venture past Ghostgate.

Vvardenfell politics is a dance between the three Great Houses of Hlaalu, Telvanni, and Redoran, as well as the Tribunal Temple, both Imperial and Dunmer, and the Empire itself. The houses maintain an air of peace and fraternal loyalty, but constant incursions, especially by 'rogue Telvanni', keep tensions high. Adding to this political tension is the strong influence of the native Dunmer temple, which controls much of Vvardenfell, and the twin influences of the Empire and the Imperial Cult, which wish to maintain stability and control the island.

Morrowind was the only province where slavery was still legal, until sometime between the events of Morrowind and the events of Oblivion, King Hlaalu Helseth abolished slavery.

The Blight is a serious disease that infects people and animals. It is a major factor in the events of Morrowind as one of the primary antagonists of the game.

The Ashblight emanates from Red Mountain in the form of Ashstorms. These storms are reddish dust storms that carry the blight and have extremely high winds associated with them. Due to the danger of infection and belligerent creatures, residents of Vvardenfell often advise against travelling during an Ashstorm.

The Ashblight has several separate symptoms, depending on who it is contracted by. Characters who contract the disease are weakened by it: variants of the disease may reduce attributes such as strength and dexterity. The creatures of Morrowind are also affected by their infection. Creatures who have contracted the Ashblight often have higher Health and are stronger than their unaffected counterparts. The disease causes uncommon aggression in normally peaceful creatures, such as Kwama.

The Ashblight (along with Corprus) was created by Dagoth Ur, the main antagonist of the game. According to him, the Ashblight was used to help gain converts to the Sixth House cult. As Dagoth Ur resided in the ruins of the Dwemer stronghold in Red Mountain, the Ashblight spread through the Red Mountain Ashstorms. During the events of the third Elder Scrolls game, however, the Nerevarine, the reincarnation of an ancient warrior named Nerevar, killed Dagoth Ur and, therefore, cut the source of the Ashblight, effectively eliminating it. Afterwards, the ashstorms lose their red tint, and become simple ashstorms again; although the Blight is eliminated, a few "Blighted" creatures remain.

By 4E 5, the Ministry of Truth fell and the Red Mountain erupted, almost completely destroying Vvardenfell. It caused much of the island to be covered in lava, deforming the land, and many settlements were subsequently destroyed. As a result, many residents fled to the mainland of Morrowind.[2] By 4E 201, Vvardenfell would continue to remain a volcanic wasteland, and transportation would no longer be available.[3] 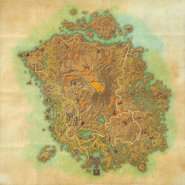 Map of Vvardenfell in Online. 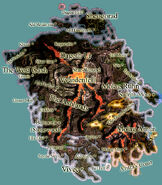 Čeština Deutsch Español Français Italiano Nederlands Polski Русский Svenska Українська
*Disclosure: Some of the links above are affiliate links, meaning, at no additional cost to you, Fandom will earn a commission if you click through and make a purchase. Community content is available under CC-BY-SA unless otherwise noted.
Advertisement