Edit
watch 02:11
'The Elder Scrolls Online: Morrowind' – A New Chapter in Vvardenfell Trailer
Do you like this video?
Play Sound

For other uses, see Vvardenfell.

Vvardenfell is a zone in The Elder Scrolls Online: Morrowind. It was released on June 6th, 2017. The region itself is a large island located in the Inner Sea of Morrowind, with the volcano of Red Mountain dominating the island's center.

On December 6, 2012, when asked how big Morrowind would be compared to The Elder Scrolls III: Morrowind, ZeniMax replied that the game would take place on the mainland areas of Deshaan, Stonefalls, and Bal Foyen, close to the size of Vvardenfell. Zenimax teased "That's not to say adventurers in The Elder Scrolls Online won't ever be able to visit Vvardenfell."[1] During the beta, the map of Tamriel displayed Vvardenfell as a future zone.[2] During the September 10, 2014 Writer's AmA, Lawrence Schick said that Vivec and Sotha Sil are "very busy and have their hands full," and that it will eventually be revealed what it is they are busy with, as Zenimax has big plans. As Vivec resides on Vvardenfell, this can be alluded to the future incorporation of the island.[3]

After Public Test Server patch 2.4.0 added the Dark Brotherhood DLC,[4] 14 locations found on Vvardenfell in Morrowind were added to the data files, located in many areas around the island's coast.[5][6] After patch 2.5.0 containing the Shadows of the Hist DLC was released, 60 new locations from Vvardenfell were found to be added to the data files, confirming each zone besides Red Mountain, Sheogorad, and the Ashlands.[7] In the PTS 2.7.0 Homestead patch,[8] a large overhead map of Vvardenfell was found,[9][10][11] which showed most of the pre-existing locations already added to the files, as well as a few new ones. Only Sheogorad and part of the northern Ashlands were not completed zones.[9]

The Halls of Fabrication is a trial that can be accessed from Tel Fyr.

Vvardenfell as seen from Stonefang Isle

Red Mountain seen in the distance from Davon's Watch 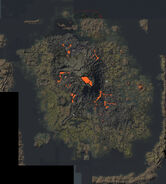 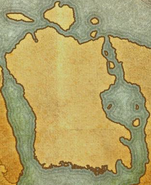 Map of Vvardenfell on the current Tamriel map