Wamasus are creatures that were once known to have inhabited Black Marsh, and had been described as "intelligent dragons with lightning for blood."[1]

Legend has it that the wamasu are enormous, frightening creatures with lightning for blood. Electricity pulses up and down the wamasu’s spine, presenting a clear warning to potential challengers. Its roar charges the air with a plasma-like effect, and its savage bite attack also has an electrical element. Wamasu eggs emit lightning before they hatch.[2]

Ogondar and Logodvild have at the Wailing Hag Inn are believed to have seen a Wamasu.[3]

Haynekhtnamet was a Wamasu from ancient times. This creature was slain by "northern men" in a battle that took place over seven days, and involved a score of men. One took a fang home as a trophy, and fashioned it into a small dagger, which became known as the Fang of Haynekhtnamet. The user of the dagger can deal shock damage to their opponents.[1]

Ganakton the Tempest is a Wamasu known to have inhabited Arx Corinium.[4] 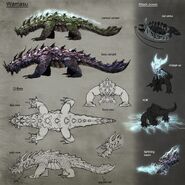 Wamasu in-game model.
Add a photo to this gallery

Retrieved from "https://elderscrolls.fandom.com/wiki/Wamasu?oldid=2458356"
Community content is available under CC-BY-SA unless otherwise noted.