For other uses, see War Axes. 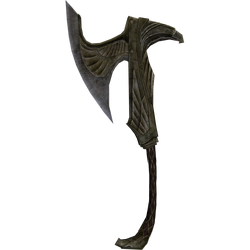 War Axes are One-handed weapons found in The Elder Scrolls V: Skyrim. They offer a balance between swords and maces, swinging faster than the latter but more damaging than the former.

War Axes benefit from several perks in the One-Handed skill tree. They are:

Retrieved from "https://elderscrolls.fandom.com/wiki/War_Axes_(Skyrim)?oldid=3068645"
*Disclosure: Some of the links above are affiliate links, meaning, at no additional cost to you, Fandom will earn a commission if you click through and make a purchase. Community content is available under CC-BY-SA unless otherwise noted.