He wields either a leveled one-handed weapon and shield or a two-handed weapon. At lower levels he is known to wield an enchanted Ancient Nord Greatsword. He has a very high armor rating, about 400. Warlord Gathrik has three shouts at his disposal: Frost Breath, Unrelenting Force and the Disarm shout. His health is also remarkably high, close to, or equal to that of dragon priests. His combat style is very straightforward, which entails going after the primary aggressor. He is also faster than the usual draugr.

Gathrik's appearance may vary between the "less armored" draugr type and the "armored" type. He is noticeably taller than normal draugr deathlords, about 4 feet taller. At higher levels, Gathrik may also appear as a dragon priest and thus be a magic user. 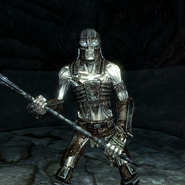 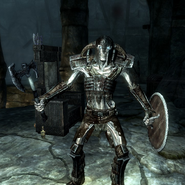 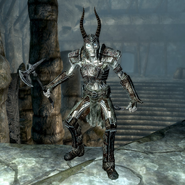 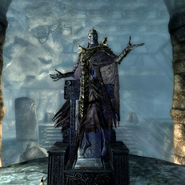 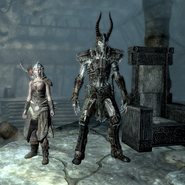 Retrieved from "https://elderscrolls.fandom.com/wiki/Warlord_Gathrik?oldid=2873999"
*Disclosure: Some of the links above are affiliate links, meaning, at no additional cost to you, Fandom will earn a commission if you click through and make a purchase. Community content is available under CC-BY-SA unless otherwise noted.