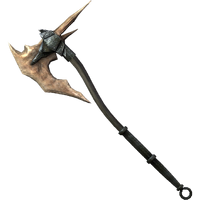 For other uses, see Weapons.

Weapons in The Elder Scrolls V: Skyrim offer a similar level of diversity as previous The Elder Scrolls titles, with both one- and two-handed versions of swords, axes, and mace/hammers, as well as one-handed daggers and bows.

Two-handed weapons, in general, are heavier and slower than one-handed weapons, but also deliver more damage and have a greater reach. With the exception of bows, crossbows, and staves, weapons also be used to block attacks, though shields are more effective.

There are dozens of different types, ranging from iron at the lowest level, and Daedric weapons at the highest, each with varying degrees of weight. With the addition of The Elder Scrolls V: Dawnguard, dragonbone weapons, which are stronger than Daedric weapons, can be obtained, as can the crossbow.

They are essential tools for survival in Skyrim, and can be bought, looted, stolen, forged, or received as a reward. Weapons can be upgraded at a grindstone with the right materials and perks.

The following is a complete list of weapons in The Elder Scrolls V: Skyrim and its add-ons.

Daggers are the lightest and fastest-swinging of the one-handed weapons, but deal the least damage compared to other weapons in their class. However, they also receive much higher damage bonuses from sneak attacks with the right perks.

Maces are the heaviest and slowest of the one-handed weapons, but deal the most damage.

Swords are slightly slower than daggers, but deal more damage, though swords are faster and weaker than maces and axes.

War axes are slower than swords but deal more damage. They are faster than maces but deal less base damage.

Weapons that don't fit into any of the above categories.

Battleaxes are slower than greatswords, but deal more damage. They are faster than warhammers but deal less damage.

Greatswords are the fastest of the two-handed weapons, but deal the least damage.

Warhammers are the slowest of the two-handed weapons, but deal the most base damage.

Crossbows are a part of The Elder Scrolls V: Dawnguard only. They are stronger than most bows, but fire slower.

Crossbows bolts are a part of The Elder Scrolls V: Dawnguard only.