The Welwa are creatures that inhabit the region of Craglorn in eastern Hammerfell. They were known to have inhabited the Summerset Isles during the Merethic Era, and are still thought by some scholars to be either extinct or mere legend.[1][2]

In the poem The Lay of Firsthold, it is said that the Welwa, along with Gheatus and Ilyadi, sought the demise of the Aldmer after their arrival on Auridon. Kinlord Torinaan then drove these monsters to their doom, after using ancestral lore to draw power from the stars, smiting them with blasts of lightning, ice, and fire.[3][4] The Welwa are depicted in Summerset's sculpture and tapestry as "strange, holy beasts of horns, and savage teeth," as well as "ravagers and saviors of the land."[1] They were later reintroduced to Summerset by Ambolisse, the Sapiarch of Zoological Studies, despite some protests from the Altmer living on the island.[4]

Welwa can often be found either roaming the wilds of Craglorn in packs, or in the company of Iron Orcs, serving as domesticated beasts that will attack any outsiders. 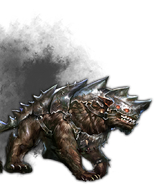 Retrieved from "https://elderscrolls.fandom.com/wiki/Welwa?oldid=3045484"
*Disclosure: Some of the links above are affiliate links, meaning, at no additional cost to you, Fandom will earn a commission if you click through and make a purchase. Community content is available under CC-BY-SA unless otherwise noted.