According to On Lycanthropy, Skyrim is said to be teeming with werebears, and they are the reason some people use canis root,[1] as it is believed that smearing crushed canis root on trees surrounding the home repels these werebears. Werebears are only found on the island of Solstheim, an outlying island formerly the property of the province of Skyrim. In the past, the Daedric Prince Hircine used the island for hunts using lycanthropes.

They perform in the same manner as werewolves, as their attacks are identical. They attack with their claws and teeth, but also possess a lunge attack which knocks the target off their feet. Unlike werewolves, some werebears revert to their natural form upon death. They often attack in groups of up to four, which can be very challenging.

The Conjure Werebear power can be gained during the "Cleansing the Stones" quest, after cleansing the beast stone.

A pack of three werebears can be found at Snowclad Ruins, at which they can be seen in human form before transforming and attacking. 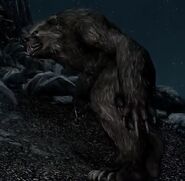