See expansion information within the article

For other uses, see Werewolf.

Werewolf is a creature in The Elder Scrolls V: Skyrim. They are the most commonly known type of lycanthrope found in Tamriel, where they can be found in every province. Werewolves are individuals who assume wolf-like characteristics during the full moon (or in some cases, at will).

"I'm telling you, I heard it! Howling! Those werewolf tales are true!"
―Hold Guards[src]

While first appearing in The Elder Scrolls II: Daggerfall, werewolves are featured more prominently in The Elder Scrolls III: Bloodmoon. Werewolves also appear in The Elder Scrolls V: Skyrim. The Dragonborn may become one by completing The Companions quests and attending a ritual which involves drinking the blood of Aela the Huntress while she is in Beast Form. From this point onwards, those carrying the gift (or curse, depending on whom one is talking to), will be able to change into a Werewolf once a day, which causes people nearby to retreat and yield or attack. The Dragonborn will also receive a bounty if the transformation is witnessed by a citizen.

Members of any faction will not attack the Dragonborn in either humanoid or Werewolf form after joining, nor will a Hero of Sovngarde assault them.

Skills, perks, spells and abilities as apply (or do not apply) to the Werewolf:

In Skyrim, the only way to become a Werewolf is to complete the quest line for the Companions of Jorrvaskr in Whiterun, up until the quest "The Silver Hand." Within the Companions exists the Circle, an inner sub-faction. After some time, Skjor will lead the Dragonborn to The Underforge. There he will offer the opportunity to drink the blood of Aela the Huntress when she is in Werewolf form, and become a Werewolf.

Note: With the addition of Dawnguard, characters who already have the Vampire Lord power will lose it at this point, and it will be replaced with Beast Form, and vice versa.

Beast Form lasts approximately two and a half minutes, with only one use per day. Unlike in Morrowind, one does not change into a Werewolf at a fixed time, as it is a power. To be able to stay in Werewolf mode for a prolonged period of time, one must "Feed" off fallen human characters, which adds 30 seconds to the current time per feeding, and also heal the Dragonborn. With Dawnguard installed, the Dragonborn can choose a perk that allows them to feed on almost any fallen opponent, although it only prolongs the duration for half of what feeding off of humanoid opponents gives. Once returned to normal form, all items will have been unequipped and the Dragonborn will have to wait twenty-four hours to be able to use Beast Form again.

If the Dragonborn has obtained the Ring of Hircine, equipping it will allow the use of a separate power, "Ring of Hircine," which is identical to Beast Form and offers all the same benefits. The only difference is that it is not limited to once-a-day use, it is made available any time the Dragonborn equips the ring. Followers will not react to the Dragonborn's transformation. Due to the restrictions placed on Werewolves interacting with objects and characters, one will not be able to interact with a follower while transformed (on Xbox 360, one can bypass this by using Kinect commands). A follower will become hostile if hit while the character is in Beast Form, even if they are a companion.

Eorlund Gray-Mane will defend the Dragonborn if they transform publicly in Whiterun.

Wild wolves become non-hostile when one is in Beast Form, but wild Werewolves, added on by Dawnguard, will still attack.

The Dragonborn can be killed while transforming, if facing a powerful enough foe. 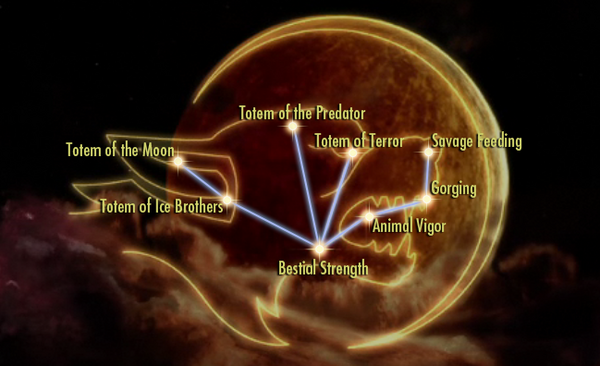 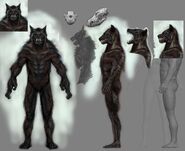 A werewolf (top-right corner) as seen in concept art for Riverwood.

Deutsch Español Français Polski Русский Türkçe Українська
*Disclosure: Some of the links above are affiliate links, meaning, at no additional cost to you, Fandom will earn a commission if you click through and make a purchase. Community content is available under CC-BY-SA unless otherwise noted.
Advertisement