"The western highlands of Vvardenfell are called the West Gash. The region extends from the Sea of Ghosts on the northwest coast to the inland town of Balmora, where the region is sandwiched between the Bitter Coast and the Ashlands."
―Anonymous[src]

The West Gash is one of the nine regions that make up the island of Vvardenfell. It is a massive grazeland created in a battle between Vivec, the Warrior-Poet and the Ruddy Man. The region gets their name from the fact that it cuts or gashes deep into the area in between the Bitter Coast and Molag Amur.

West Gash makes up a large portion of the western side of Vvardenfell, reaching from as far as the northern coast to the Odai River basin. As mentioned before, the West Gash was the result of the battle between Vivec and the Ruddy Man, which caused the land to gash into southwestern Vvardenfell, creating the modern-day West Gash. The region is very fertile, north towards the Samsi River are large fungal trees with open areas of fresh grazelands, several creatures such as the Nix-Ox and the Bull Netch thrive in the area. The southern area has the potential of being volcanic since it is not far from the volcanic Molag Amur and the Foyada Mamaea. The northern area has the same issue, being very close to the local Ashlands and as a result, closer to Red Mountain. Regardless, there are more settlements in the north than in the south. What makes the region valuable to investors from the Empire is the large deposits of Ebony Ore in the southern reaches and the abundance of northern fish, as well as the trading town of Gnisis. Travelers coming from places such as Blacklight or Windhelm are prone to enter the West Gash due to its proximity. The West Gash is primarily House Redoran territory.

During the Interregnum, the western portion of Vvardenfell was under the occupation of the Great House Redoran, from as far as the Sheogoard Strait to the Balmora Pass on the northern end of the Odai River. Redoran virtually controlled the West Gash, as well as the frontier known as the Bitter Coast. House Hlaalu had operations throughout this area, most notably from the port town of Seyda Neen, in cooperation with the Gold Coast Trading Company from the Colovian West. The two most notable Redoran strongholds are the towns of Balmora and Gnisis. What was interesting about Balmora was that the city was built in the Hlaalu style with Imperial-esque architecture, without the roof and made out of clay, rather than bug shells like with the Redoran-folk or large mushroom towers like the Telvanni. Balmora became the center of economy in western Vvardenfell, due to its convenient location, in a pass between Seyda Neen and Ald'ruhn. The Redoran in Balmora had vast control over the west and would have constant conflicts with the local Ashlanders, at this point, the Ahemmusa Tribe lived in southern Bitter Coast, before moving to the Grazelands. Because the elves of Redoran and Hlaalu were a part of the Ebonheart Pact, the alliance would have substantial control over Balmora, Gnisis, Seyda Neen, and other cities.[1][2]

The city of Balmora was ruled by Councilor Eris Releth, a high-ranking member of the Great House Redoran. Eris had two children, both named Veya Releth and Ulvan Releth. Eris was devoted to the well-being of House Redoran, to the point where he had grown astray from his children, this would prove to be his downfall. Ulvan was a high-ranking member of the Redoran Guard and was well-respected for his forgiving and kindly personality. Ulvan was known to be friendly with the local Ashlanders, much to the dismay of the Redoran Council. Eris wanted to test Ulvan's loyalty to House Redoran by employing Captain Brivan to have one of his guards kill an Ashlander merchant and to see if Ulvan would intervene. When Ulvan saw this abuse, he would hastily kill the Redoran Guard in front of the other guardsmen. Ulvan was exiled from Vvardenfell by order of his father but would instead travel to the Ashlander camp located in the entrance to Kudanat. When news of this had reached Brivan, he hired the Khajiit mercenary group known as Ferhara's Warclaws to raid the camp and to kill everyone in it, including Ulvan.[1]

When Ulvan disappeared for several months with no signs. Veya became concerned and ran away from home to find her brother. This caused Eris and the other councilman to worry and to hire anyone who could find Veya. Veya would join the Morag Tong under the teachings of Naryu Virian, a veteran assassin who was present in Deshaan to fight against the Llodos Plague. Veya, Naryu, and a third traveler were able to uncover the massacre at Kudanat and Eris' plot against Ulvan. With this information, Veya traveled to the Redoran Garrison located north of Balmora to confront her father about it. In her fit of rage, she murdered her father and was unfortunately defeated by the third warrior. Her fate was left to Virian and the warrior, some say she had died in there as well, while others have said she retreated to the Summerset Isles since Morag Tong agents are meant to kill someone under a contract.[3][4][5][6]

By 3E 427, the southern portion of the West Gash was eventually taken by the merchant lords of House Hlaalu, much to the dismay to the nobles of House Redoran. The city of Balmora was occupied by the Hlaalu under the administration of Nileno Dorvayn and eventually, Imperials of the Septim Empire migrated into the West Gash. This new expansion was the result of the repeal of the Treaty of the Armistice which allowed foreigners to inhabit the Island of Vvardenfell. The Imperial Legion established the Moonmoth Legion Fort outside of the city of Balmora and investors created the township of Caldera, located on the road in between Balmora and Ald'ruhn. With the abundance of ebony inside the Caldera Crater, the Caldera Mining Company established an outpost with the area.[7]

Balmora, the city of the Odai.

Gnisis, the Redoran city of the north.

The battle between Vivec and the Ruddy Man caused the creation of the West Gash. 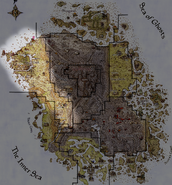 The West Gash in Vvardenfell.
Add a photo to this gallery

Retrieved from "https://elderscrolls.fandom.com/wiki/West_Gash?oldid=2971326"
Community content is available under CC-BY-SA unless otherwise noted.