White River Watch is a cave located east of Whiterun. It's now a bandit hideout and they target travelers to and from the city of Whiterun.

The cave has several rooms leading up to the top where the bandit leader can be found. One room has an Alchemy Lab. There are also five different varieties of fungi growing throughout the cave.

There is a Radiant male bandit outside carrying a note, "Note to Rodulf", indicating this is the bandit's name

The bandits can be overheard discussing their displeasure for a blind man standing guard and are plotting kill both Hajvarr and his uncle shortly. The band is also trying to train a wolf but have doubts of their ability to do so. As the wolf is still feral, it can be released to aid with dispatching the bandits.

The highest point of the cave is White River Overlook. Hajvarr can be found sitting here, where he can view Whiterun and any potential targets that may be travelling on the road. 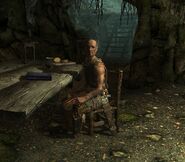 Retrieved from "https://elderscrolls.fandom.com/wiki/White_River_Watch?oldid=1503416"
*Disclosure: Some of the links above are affiliate links, meaning, at no additional cost to you, Fandom will earn a commission if you click through and make a purchase. Community content is available under CC-BY-SA unless otherwise noted.