For other uses, see Whiterun.

-Of-Dragon")[1] is the capital city of Whiterun Hold, in the center of Skyrim. In Whiterun, Nords live in the 'traditional' manner: their lives are simple, harsh, and rooted in ancient ideas. Even the city's fortifications—wooden and stone palisade walls and the sheer defensive advantage offered by its position on a large bluff that raises the city above the surrounding tundra—are archaic by contemporary standards.

Due to its central location, Whiterun serves as the commercial heart of Skyrim.

"The Plains District of Whiterun is home to the city's shops and market, while the Wind District is mostly a residential district. The Jarl's palace, Dragonsreach, dominates the Cloud District."
―Proventus Avenicci[src] 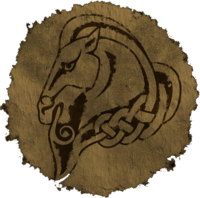 Whiterun is located on the eastern end of its Hold, in the tundra plains that fill the center of Skyrim. It was founded by Jeek of the River,[2] who was the captain of Jorrvaskr.[2] Upon discovery of the Skyforge, he and his men constructed the great mead hall of Jorrvaskr, which at the time was the sole structure on the bluff. Now, Whiterun is a large city, albeit one that retains the feel of a smaller Nord village. The central location and easy access make it one of the most successful cities in trade.

When approaching Whiterun, the towering fortress of Dragonsreach dominates the view. Its history can be traced back to the First Era, when King Olaf One-Eye subdued the great dragon Numinex in a legendary duel of Thu'um atop Mount Anthor and brought him back to the fledgling town as a captive. It was then that the magnificent keep was rebuilt and renamed to serve as a cage for Numinex, whose head still adorns the Great Hall.[3][4]

Whiterun was once considered Skyrim's equivalent of the Imperial City, but in recent times has suffered from many problems. The Civil War, excessively harsh winters, harassment by Horme bandits, and the attacks of frost trolls have diminished the once-proud city.[5]

It's a strategic city for both the Imperial Legion and the Stormcloaks because of its central location, however Jarl Balgruuf the Greater remains neutral in the conflict.

The city is home to two important dynastic families, the Gray-Manes and the Battle-Borns. Once on good terms with one another, they are currently bitter enemies, as a result of their differing views on the civil war conflict, as well as the economic disparity between both clans, since the Battle-Borns are wealthy and the Gray-Manes are modest. Upon entering the city, the Dragonborn is able to choose a side, either Battle-Born or Grey-Mane, although this is not necessary to interact with the city's shops and temple.

Whiterun is home to The Companions, a faction similar to the Fighters Guild of Cyrodiil. Their headquarters are in Jorrvaskr, a legendary mead hall that was built next to the Skyforge, an ancient forge that is said to be older than both men and Elves. The city of Whiterun itself was built around Jorrvaskr, which attracts warriors from all across Tamriel.

Initially, Jarl Balgruuf claims that he has yet to decide who to join in the Civil War, making the city of Whiterun neutral.[6] He does claim to owe a favor to General Tullius, to whom he seems indebted,[source?] but also suggests that he owes a favor to Ulfric Stormcloak as well.[source?] He will note that he believes that he and Whiterun have obligations to the Empire and owes it his loyalty, but will also tell that he must honor the Nord people desiring independence as well.[6] Eventually, he and Whiterun will side with the Empire, although there are several indicators beforehand that suggest Whiterun leans more towards the Empire:

This is the first district any visitor to Whiterun enters, named as such because it is the lowest of the three and therefore closest to the plains outside the city. It contains all the major merchants, the marketplace and Breezehome.

The Wind District is where most of Whiterun's residential buildings (including the mead hall Jorrvaskr and the Gildergreen) are located and was named because of the strong mountain winds that gust through the area.

The Cloud District is the smallest of Whiterun’s three districts. Its name is derived from the fact that it is located atop the bluff Whiterun was built on and is therefore closer to the clouds than any other. It is dominated by the imposing form of Dragonsreach.

Breezehome, the house in Whiterun, costs 5000

and can be bought from the steward after the Jarl grants permission, in gratitude for retrieving the Dragonstone from Bleak Falls Barrow. The seller is either Proventus Avenicci or Brill, depending on who remains Jarl after the Civil War. Earning approval requires the performance of certain tasks around the city. You can also buy the decorations for your home from the Steward, such as a laboratory and storage space.

Whiterun from a distance.

Jorrvaskr, home of the Companions.

Whiterun in the distance at night.

Aerial view from the south.

Aerial view from the east.

Bird's-eye view of the city.

A panorama image of Whiterun.

A view of Whiterun.

Whiterun in the morning, walking in through the front gate.

The statue of Talos.

The view looking southwest from the Plains District.

The Hall of the Dead.
Add a photo to this gallery

Retrieved from "https://elderscrolls.fandom.com/wiki/Whiterun_(Skyrim)?oldid=3086851"
*Disclosure: Some of the links above are affiliate links, meaning, at no additional cost to you, Fandom will earn a commission if you click through and make a purchase. Community content is available under CC-BY-SA unless otherwise noted.