Will of the Council

Will of the Council is a quest available in The Elder Scrolls Online. The council has decided to kill Sees-All-Colors. Aelif and the Vestige confer withMerric, who has returned to the Earth Forge to finish the Prismatic Core.

The Vestige must use the Prismatic Core in battle against the Mortuum Vivicus. They can choose it to be a longsword (one-handed sword), greatsword (two-handed sword), staff or bow. Jofnir Iceblade will track Sees-All-Colors. He says she is in the Halls of Submission—she is working for Molag Bal.

The Vestige takes the Prismatic Weapon and travels to the Halls of Submission.

Colors says she is working for the Daedric Prince Meridia and killed Jofnir because he would not listen to her after she mobilized to the Guild to defy Molag Bal. She believes Aelif is the one who serves Molag Bal, but Colors was afraid Merric, who serves Stendarr, would not have understood her serving Meridia. The player can then choose whether she lives or dies.

Aelif tries to kill Colors and shouts "For Molag Bal!" She is working for the Prince of Lies. After shutting down the blood fonts, Aelif turns into a Titan.

If the Vestige lets Sees-All-Colors live, they can decide whether or not she continues to serve the guild. If she stays with the guild, she will become the "Light of the Guild," an advisor to the Guildmaster. Merric becomes the new guildmaster. Jofnir retrieved the Prismatic Weapon for the player, and they can again choose what shape they want it to take. 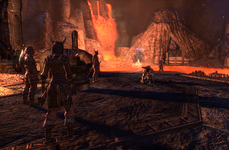 Retrieved from "https://elderscrolls.fandom.com/wiki/Will_of_the_Council?oldid=3032085"
*Disclosure: Some of the links above are affiliate links, meaning, at no additional cost to you, Fandom will earn a commission if you click through and make a purchase. Community content is available under CC-BY-SA unless otherwise noted.