Windridge Cave is cave located southeast of Alcaire Castle Wayshrine, in the region of Stormhaven. Inside are the spirits of The Three the Vestige will encounter during the quest "Legacy of the Three." At the first visit, Sir Edain's Spirit will appear at the entrance.

Legacy of the Three[edit | edit source]

The Vestige discovered evidence of something amiss at the Windridge Cave in Alcaire. The fates of a knight and his comrades seem inexorably tied to the existence of The Three, a trio of bandit chieftans who once dwelled in these caves. 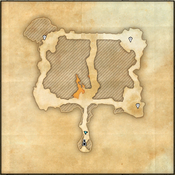 Retrieved from "https://elderscrolls.fandom.com/wiki/Windridge_Cave?oldid=3035286"
*Disclosure: Some of the links above are affiliate links, meaning, at no additional cost to you, Fandom will earn a commission if you click through and make a purchase. Community content is available under CC-BY-SA unless otherwise noted.