Windstad Manor is a homestead which can be built on land purchased in Hjaalmarch in The Elder Scrolls V: Hearthfire.

Windstad Manor sits on the lightly forested banks at the delta of the Karth and Hjaal Rivers, in northern Hjaalmarch.

To the west is the imposing sight of the arch of Skyrim's capital, Solitude. To the north are the icy waters of the Sea of Ghosts, and to the northeast, just a stone's-throw away, is the ancient Nordic tomb of High Gate Ruins. Morthal, the Hold capital, lies a fair distance to the southwest. If Lights Out! has been started, the shipwreck of the Icerunner will appear just a few yards away to the northeast.

Upon completion of the quest Laid to Rest, this site can be bought from the steward of Hjaalmarch at Highmoon Hall in Morthal for 5,000

. Depending on the progress of the Civil War, this steward will be either Aslfur or Pactur. The dialog option will say, "I'd like to purchase a house." However, when that option is chosen, the steward will say that there are no houses available, but there is some land.

The characters unique to Windstad Manor are: 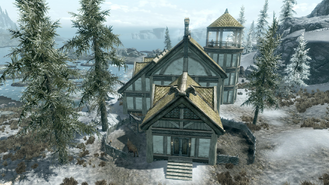 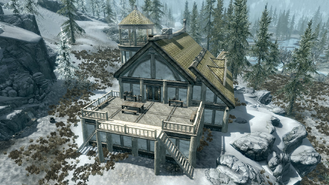 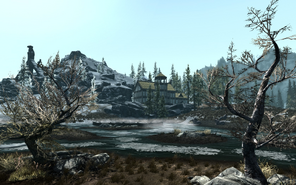 View of Windstad Manor from the nearby marshes viewing the Enchanter's Tower extension.
Add a photo to this gallery

Retrieved from "https://elderscrolls.fandom.com/wiki/Windstad_Manor?oldid=1503438"
*Disclosure: Some of the links above are affiliate links, meaning, at no additional cost to you, Fandom will earn a commission if you click through and make a purchase. Community content is available under CC-BY-SA unless otherwise noted.