For other uses, see Winged Twilight.

Winged Twilights are a type of Daedra found in The Elder Scrolls III: Morrowind. They are portrayed as humanoid, bat-like creatures with blue skin and purple hair done up in a pony tail. The are said to be the servants of the Daedric Prince Azura.

Molag Grunda, a Winged Twilight, is involved in the quest. She is apparently Molag Bal's daughter, who is in an affair with a Frost Atronach named Nomeg Gwai. Molag Bal is disappointed with her, and orders the Nerevarine to slay both her and her lover. In return, Molag Bal cures them of vampirism.

Winged Twilights can be found at any level in following locations: 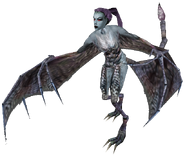 Model of Winged Twilight
Add a photo to this gallery

Retrieved from "https://elderscrolls.fandom.com/wiki/Winged_Twilight_(Morrowind)?oldid=2844532"
*Disclosure: Some of the links above are affiliate links, meaning, at no additional cost to you, Fandom will earn a commission if you click through and make a purchase. Community content is available under CC-BY-SA unless otherwise noted.