Wisdom of the Ages

Priory of the Nine

Knights of the Nine

Shield of the Crusader

Knights of the Nine Quests

For other uses, see Wisdom of the Ages.

Wisdom of the Ages is a quest available in The Elder Scrolls IV: Knights of the Nine. The Hero has answered the call and has set forth to find the remaining Relics of the Crusader. At the Priory of the Nine, they have discovered from Sir Henrik that the Shield is located in the Fort Bulwark which is along the Cyrodiil-Black Marsh border, a distant east of the Shrine of Nocturnal.

The Fort is inhabited by conjurers who summon a wide variety of Daedra. There are two turn-handles to find, which are easy to find when the fort is properly explored.

There is also a puzzle that consists of four rows of three floor-tiles. The clue to solving this is found in a Conjurer's Note, which is found on the body of one of the conjurers. The relevant section reads: "Make note of the candles along the walls if you would pass through." Each of the four rows has one, two or three candles at one end. The number of candles is the solution to the row - in order, these are: 1-2-3-1.

The correct tiles have a distinct click noise when activated; the incorrect tiles sound different when stepped upon. Do not stand on any other tiles in between - there should be adequate space to walk between the tiles rather than jumping. If done correctly, the gate ahead will then open.

After passing into the second area of the Fort, there is a prisoner in a cell on the right. Release the prisoner, who is named Sir Thedret, and he will tell them "When the eyes of the Guardians are upon you, Julianos will show you favor." He will then head to the Priory of the Nine while they continue searching the fort.

There are two draw bridges that must be crossed, the handles to open them are next to the bridge itself, however there are several dart traps that can easily kill the Hero if they time things wrong. Assuming stocked up on the health potions dropped by the conjurers, lower the first draw bridge and time their run all the way to the handle for the second bridge, if they stand close enough to it they will be safe while to regain their health. Lower the second draw bridge and run through to safety on the other side when the darts stop.

Puzzle one: Turning the statuesEdit

Head into a large room with several conjurers and several guardian statues. Eliminate the conjurers and turn a switch on each side of the statues to get them all facing the center.

Stand in the center of the statues and the door to the left of the room will unlock. They will have to turn the two statues closest to the scolar's statue multiple times to get them facing the center.

Go through it and follow the passage to another puzzle room. This simple puzzle involves matching the right item to the right chest. To start, stand on the switch in the center and take the item in the box (it's random).

While standing on the switch, look around. One of the statues along the wall will have an image of an item from the box in front of it. If one do not know which statue the item you have goes to, guess while keeping in mind which item should go to which chest. When the right item is placed in the appropriate chests, the chest's statue will turn around.

After completing the second puzzle, the lights dim and a door in the center opens, allowing them into the next room to claim the shield. Grab it and head back to the priory. 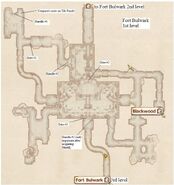 Matching the items
Add a photo to this gallery

See more discussions >
Retrieved from "https://elderscrolls.fandom.com/wiki/Wisdom_of_the_Ages_(Knights_of_the_Nine)?oldid=2851590"
*Disclosure: Some of the links above are affiliate links, meaning, at no additional cost to you, Fandom will earn a commission if you click through and make a purchase. Community content is available under CC-BY-SA unless otherwise noted.