For other uses, see Wizard.

The Wizard is a manic Bosmer mage who can be randomly encountered in the wilds of Solstheim trying out a new flying spell he has created.

If spotted from a distance, he can be heard speaking to himself and repeating the following lines:

Approaching the wizard will cause him to begin casting the flying spell. The spell works and he will shoot into the sky while exclaiming, "It's working, I'm flying! I'm really flying! Hahahaha!"

His amazement is short lived, however, as he yells out "What?! Ooooohhhhhh Nooooooooooo!!!!!" once he realizes he is plummeting towards the ground. He dies on impact but upon searching his body, a journal can be found that reveals some of his insane thoughts, and mentions a mysterious book containing secret hidden knowledge.

He wears an Apprentice Robes of Alteration, an Apprentice Hood, and Boots. He also carries a leveled staff and the Journal of a Madman. 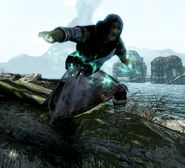 The wizard casting the flying spell. 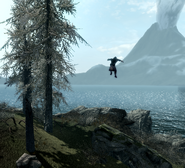 Falling from flight.
Add a photo to this gallery

See more discussions >
Retrieved from "https://elderscrolls.fandom.com/wiki/Wizard_(Dragonborn)?oldid=2935136"
*Disclosure: Some of the links above are affiliate links, meaning, at no additional cost to you, Fandom will earn a commission if you click through and make a purchase. Community content is available under CC-BY-SA unless otherwise noted.